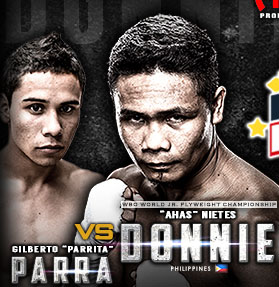 It was not an easy job for Nietes, who had to wait until the ninth-round to send the Mexican boxer to the canvas. Parra, however, managed to survive the round after he was saved by the bell.

A ringside physician, however, stopped Parra from going into the 10th round due to his injury, caused by the series of left-right combination to the face unleashed by Nietes.

With the latest victory, Nietes is now the longest-reigning Filipino world champion, who has been able to defend his belt for the past seven years already.

Nietes said he wants to extend his wining streak to 10.

Nietes was born 13 May 1982 in Murcia, Negros Occidental, Philippines. He worked as a utility man at the Antonio Lopez Aldeguer (ALA) boxing gym before taking up boxing.