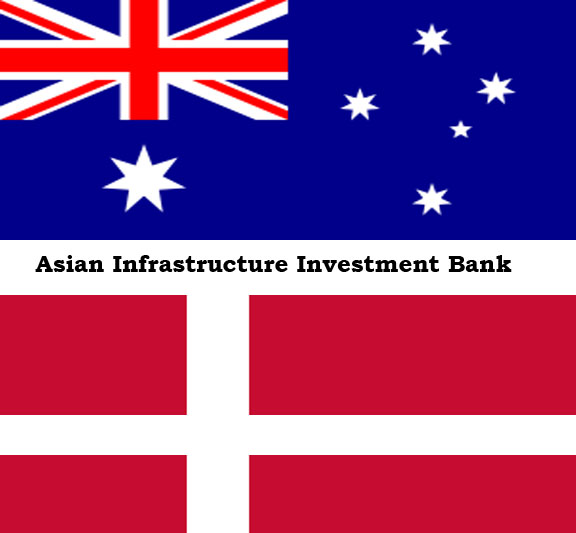 Two United States allies have announced their decisions to join the China-led Asian Infrastructure Investment Bank (AIIB), beating the 31 March deadline set by China for countries that want to be founding members.

Denmark submitted its application letter on Saturday while Australia followed on Sunday, China’s Ministry of Finance said, adding that China welcomed the decisions of the two countries.

According to the statement issued by the ministry, Denmark will become a founding member of the AIIB on April 12 while Australia will be admitted on April 13 if all existing members approve their applications.

In a joint statement with Foreign Minister Julie Bishop and Treasurer Joe Hockey, Australian Prime Minister Tony Abbott said the MOU will enable Australia “to participate as a prospective founding member in the negotiation of setting up the bank.”

“The government has discussed the AIIB extensively with China and other key partners inside and outside the region,” the statement said.

“Good progress has been made on the bank’s design, governance and transparency over the past few months, but we still have issues that we will address through ongoing consultations.”

Denmark, meanwhile, said joining the AIIB is a significant and exciting development in the world order that China is now establishing the AIIB.

Danish Minister of Trade and Development Mogens Jensen said that since many Danish trade interests as well as development cooperation interests will be at stake in AIIB, there are many reasons to engage in and influence AIIB’s investment decisions from its beginning.

“I am very happy that our government has taken this step,” said Friis Arne Petersen, Danish Ambassador to China, adding that by joining the AIIB Denmark can help with the poverty eradication in the region.