CENTRAL CHINA MANAGEMENT COMPANY LIMITED (CCMGT or the Company, HKG: 9982), a leading property project management company in China, announces its annual results for the 12 months ended 31 December 2021 (the Reporting Period). Benefiting from the fact that China achieved economic growth, continuous improvement in the management standards of property developers in China and the “Greater Central China” strategy of the Company, the revenue of the Company increased 13.0% to RMB1,300 million as compared to 2020. Net profit amounted to RMB770 million, representing an increase of 13.0% as compared with the last year. Net profit margin was 59.2%. The earnings per share increased RMB1.42 cents to RMB24.39 cents. The Board of Directors declared a final dividend of HK9.90 cents (equivalent to RMB8.09 cents) per share for the year ended 31 December 2021. 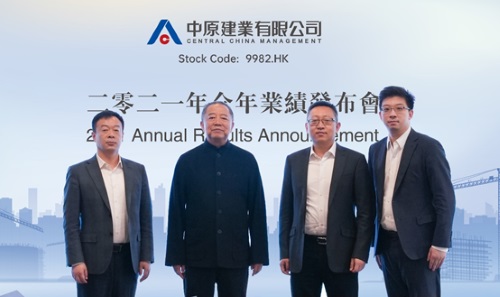 During the last year, CCMGT was rooted in the Greater Central China region and the Company continued to improve comprehensive capabilities, increase brand influence, consolidate presence in Henan, and grow the Group’s confidence. During the Reporting Period, guided by the “Greater Central China” strategy, the Group had 261 projects under management in 119 cities and counties, including 100 cities and counties in Henan and 19 cities and counties in provinces other than Henan, which cover 8 provinces, including Henan, Anhui, Shanxi, Shaanxi, Hebei, Jiangsu, Shandong and Hubei with a population of 430 million. The GDP in the region accounts for 1/4 of the total in China. The Group had an aggregate GFA of 30.97 million sq.m, representing an increase of 21.3% as compared with the last year. During the Reporting Period, the Company had a newly contracted GFA of 10,020,000 sq.m, a year-on-year increase of 16.8%, which included the projects under management were those in provinces other than Henan with GFA of 2.59 million sq.m., an increase of 95.6% as compared with 2020.

In addition, the total investment in property development in China amounted to RMB14.7602 trillion in 2021, representing a year-on-year increase of 4.4%. The sales of commercial property grew 4.8% year on year to RMB18.2 trillion. In the context of financing control with “three lines, four levels” and fading of benefits from urbanization, fault tolerance in the industry has been reduced. The property developers pursued stability and safety. The management standards of property developers will continuously improve.

Mr. Wu Po Sum, Chairman and non-executive Director of CENTRAL CHINA MANAGEMENT COMPANY LIMITED, said, “China’s economy came to a steady end in the tough year of 2021 and this creates a positive, favorable environment for businesses to grow. Moreover, with the release of the State Council’s “Guideline on Promoting High-quality Development of the Country’s Central Region in the New Era” in 2021 and other related policies, a large number of national strategies unleashed the benefits and huge market demands in the Greater Central China region, which has been the main foundation for the development of the Company. The Greater Central China region is expected to become an important growth driver for China’s economy in the future. The Greater Central China region has a high population density, fast economic growth, low urbanization and unbalanced development. Thus, there is enough room for competition and the prospect for development in the future is promising in the project management industry in China.”

Looking ahead, Mr. Wu Po Sum said, “Currently, the development of the real estate development sector in China is gradually facing limitations. The project management industry, however, has great potential and promising outlook with a high net profit margin. The Group will continue to perform full process fine project management, further enhance management capability, and diversify business models. The Group will also continue to forge core competitiveness, consolidate its leading position, and become the leading enterprise in the property management industry. Moreover, the Group will seek common prosperity with more partners and unleash the potential in the market, creating greater value for Shareholders.”

CENTRAL CHINA MANAGEMENT COMPANY LIMITED (CCMGT or Company, HKG: 9982) is a leading project management company in China with a strategic focus on Greater Central China. Relying on the well-known Jianye brand, unique asset-light business model, professional project management services, a comprehensive network of high-quality contractors and suppliers, and a set of standardized, high-quality, and continuously optimized and updated “Jianye standards”. As a solid foundation for its business, CCMGT continues to help projects create higher value and further consolidate its position as a leading project management company in China.