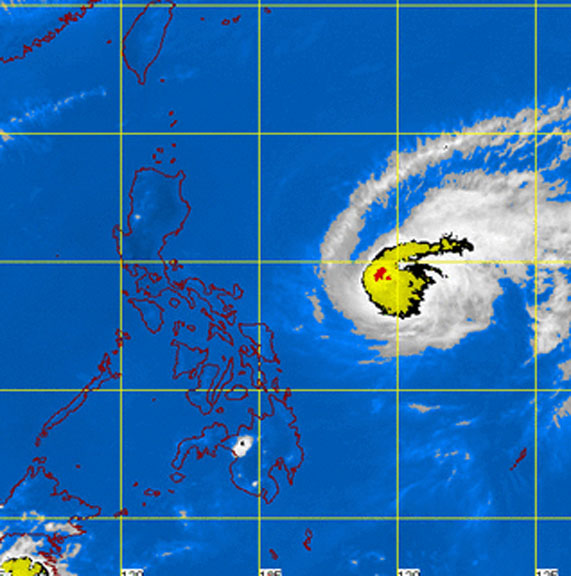 PHILIPPINES – Typhoon Chedeng, international name Maysak, has weakened slightly as it moves towards the eastern coast of Central and Northern Luzon in the Philippines, the country’s weather forecaster said.

According to the latest severe weather bulletin issued by the Philippine Atmospheric Geophysical and Astronomical Services Administration (Pagasa) at 2 pm Friday, typhoon Chedeng was located at 880 kilometers East Southeast of Casiguran, Aurora.

It continues to pack maximum sustained winds of 150 kilometers per hour near the center and gustiness of up to 180 kph.

The strength of the typhoon was much weaker than the 240 kph registered before it entered the Philippine Area of Responsibility.

Typhoon Chedeng is expected to be 555 kilometers East Southeat of Casiguran, Aurora on tonight and wil be 130 kilometers Southeast of Tuguegarao City, Cagayan by Saturday evening.

Residents in low lying and mountainous areas of the provinces with public storm signal Number 1 are alerted against possible flashfloods and landslides.

Storm surges and sea surface waves of up to 2 meters are possible over the eastern coast of Aurora, Quezon and Isabela.

Fisher folk are advised not to venture out over the eastern seaboard of Aurora, Quezon, Bicol Region and Visayas.

It is advised to refrain from outdoor activities particularly along beaches of the eastern section of Luzon starting Saturday. – BusinessNewsAsia.com