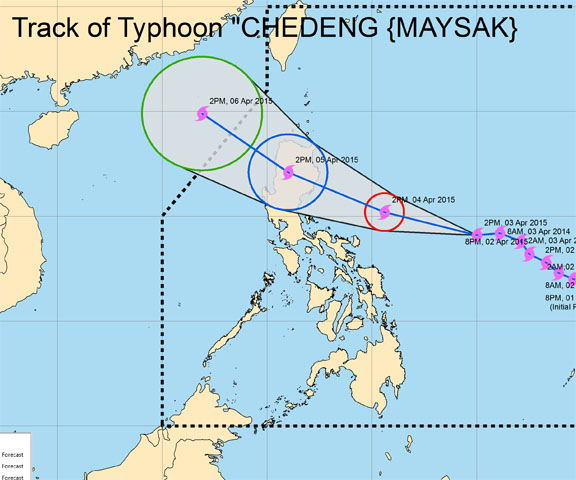 Signal Number 1 means winds of 30 to 60 kilometers per hour are expected in at least 36 hours.

Based on the latest Pagasa forecast, Chedeng has maximum sustained winds of 140 kilometers per hour near the center and gustiness of up to 170 kph, moving West Nortwest at 19 kph.

By Monday afternoon, Chedeng is forecast to be 430 km Northwest of Laoag City, Ilocos Norte or already out of the Philippine Area of Responsibility.

As this developed, Secretary of the Interior and Local Government Mar Roxas urged all concerned local government officials to maintain a high level of preparedness in areas to be affected by typhoon Chedeng’s landfall on Sunday.

Roxas directed the local government units (LGUs), particularly in Region 2 and Cordillera Administrative Region, to keep monitoring the situation in their jurisdiction and widen the contingency measures not only to local constituents but also to thousands of travellers who are vacationing in their area during the Lenten break.

Roxas, who is also the vice chairman for preparedness of the National Disaster Risk Reduction and Management Council (NDRRMC), directed the Philippine National Police (PNP) to mobilize police personnel to manage traffic flow along minor and major thoroughfares going out of the affected areas to assist motorists out of the affected provinces.

“We should not be complacent. The forecast issued by Pagasa continues to tell us that there is still a threat in the safety of our constituents and our tourists staying along the path of the typhoon,” Roxas said.

Roxas also appealed to the public to heed the LGUs in their call to keep out of harm’s way even before “Chedeng” hits the eastern seaboard of Luzon.

The DILG chief also directed the LGUs in Bicol and southern Quezon to be ready for a possible storm surge in Ragay Gulf, Lamon Bay, and San Miguel Bay.

Roxas said that the PNP and Bureau of Fire Protection had been directed to deploy their search and rescue, clearing and emergency medical teams in all affected LGUs even before typhoon hits land. – BusinessNewsAsia.com