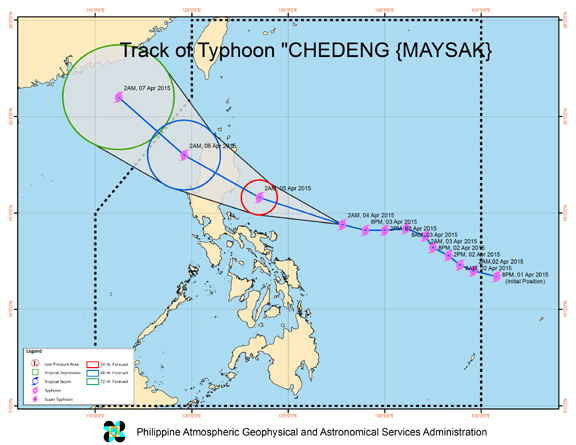 MANILA, PHILIPPINES – Intensifying its efforts in the preparations for Typhoon Chedeng, the Department of Social Welfare and Development (DSWD) is also focusing its attention on providing emergency telecommunications support in areas that will be hit by the typhoon.

“In times of disasters, the need for communication is as important as the need for food. People in disaster-stricken areas need to immediately communicate with their loved ones to assure them that they are safe or to ask for help,” DSWD Secretary Corazon Juliano-Soliman said.

To ensure the smooth flow of communication during these crucial times, staff of the DSWD’s Information Management Bureau (IMB) will be deployed to critical areas when necessary.

“In the aftermath of Typhoon ‘Yolanda,’ our IMB team provided the much-needed emergency telecommunications in the various DSWD relief hubs,” Sec. Soliman added.

In preparing for ‘Chedeng’, the Response Cluster under the National Disaster Risk Reduction and Management Council (NDRRMC) has partnered with telecommunication companies such as the Philippine Long Distance Telecommunications (PLDT) and SMART, which provided five landlines, two mobile phones, one wireless router and three pocket wifi at the Operations Center at Camp Aguinaldo.

The two companies have also committed to provide communications van ready to be deployed to affected areas.

The Response Cluster also cited that there is a need to provide Very High Frequency and High Frequency Radio equipment to ensure that communications with the hard-to-reach areas like Maconacon in Isabela and Divilacan, Dilasag, and Dilapigue in Aurora is not cut.

During the press briefing at the National Disaster Risk Reduction Management Council (NDRRMC) at Camp Aguinaldo, Department of Social Welfare and Development (DSWD) Assistant Secretary Vilma Cabrera said that these provinces will be directly affected by ‘Chedeng’, hence, local authorities have advised the residents in coastal and mountainous areas to evacuate.

Asec. Cabrera urged residents along the typhoon path to heed the call for evacuation of local authorities.

Members of the Search and Rescue Cluster under the Response Pillar of the NDRRMC are ready to assist in the pre-emptive evacuation.

In Baler, Aurora around 10,000 people, including foreign and domestic tourists were asked to end their vacation and leave the area.