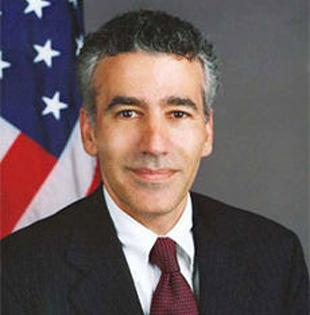 MANILA, PHILIPPINES – US Ambassador to the Philippines Philip Goldberg has reiterated the US government’s assurance that it will continue to stand “together, shoulder-to-shoulder” with the Philippines when it is threatened.

Goldberg, who spoke during the 73rd commemorative rites of the Araw ng Kagitingan or “Day of Valor” at the Mount Samat National Shrine in Pilar, Bataan, said the Philippines will not stand alone against its enemies.

“Make no mistake, as President (Barack) Obama said last year during his visit to Manila, our commitment to the Philippines under our Mutual Defense Treaty is ironclad,” he said.

“In 2015, as in 1942, we face challenges and threats together as partners, friends, and in many cases now, family. Whether we are fighting terrorism or responding to the devastation of natural disasters, we face them together. And when the Philippines is threatened, it is not alone,” the ambassador added.

Goldberg’s statement came as the Philippines continue to address a long running territorial dispute with China in the West Philippine Sea.

The US government has called for a peaceful resolution to the territorial conflict in the South China Sea dispute.

During the Day of Valor rites, Goldberg paid tributed to the 76,000 Filipino and American soldiers who sacrificed and fought side by side during World War 2.

“We come to this place each year especially to honor the memories of thousands of Filipinos and hundreds of Americans who died. The story began on Corregidor and continued on a forced march that is remembered at the same time as one of the cruelest, yet most inspirational stories in the annals of war,” Goldberg said.