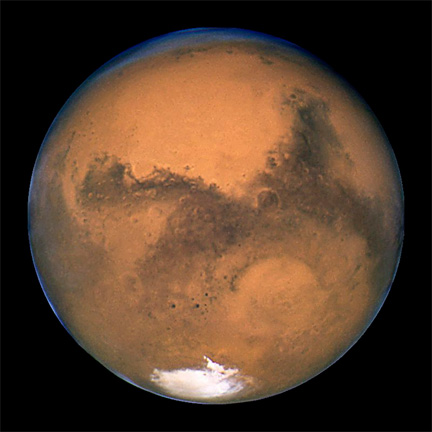 Scientists have recently discovered glaciers hidden under the surface dust of planet Mars that could produce water enough to cover the entire planet.

The question now is if the glaciers that hold 150 billion cubic meters of frozen water can actually support life on the red planet. One scientist says there is a possibility.

Researchers at the Niels Bohr Institute of the University Copenhagen calculated the size of the glaciers and thus the amount of water in the glaciers using radar observations combined with ice flow modeling.

“We have calculated that the ice in the glaciers is equivalent to over 150 billion cubic meters of ice — that much ice could cover the entire surface of Mars with 1.1 meters of ice,” lead author Nanna Bjornholt Karlsson, a postdoc at the Center for Ice and Climate at the Niels Bohr Institute, said in a statement.

Therefore, the ice is “an important part of Mars’ water reservoir,” she added.

The researchers said that the glaciers can be found in belts around Mars between the latitutdes 30 degrees and 50 degrees on both the northern and southern hemispheres.

As revealed by this week’s issue of Geophysical Research Letters, the volume of the frozen water is more or less equals to the volume of water contained in Lake Tahoe, along the Nevada and California border. – BusinessNewsAsia.com