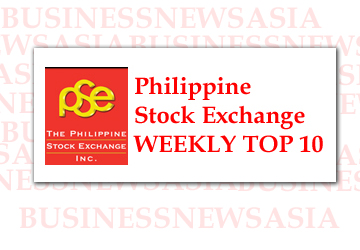 In this article, we will take a look at the Top 10 Stocks that posted double-digit gains this week, bucking the trend of falling stocks in the Philippines and around Asia.

Topping the week’s top price gainers is Now Corporation (PSE:NOW), which has a one week price change of a staggering 77.19 percent, bringing its 4-week gains to a whooping 110.42 percent.

Was insider trading involved in the unusual price movement?

On 12 October, the Surveillance Department of the Capital Markets Integrity Corporation directed Now Corporation (PSE:NOW) to submit a written statement under oath confirming the existence or absense of any undisclosed information that could have triggered the unusual price movement of its shares on October 2015.

The company replied by saying that it is not aware of any event that would trigger the price movement or increase of its shares.

On the 14th of October 2015, Now Corporation (PSE:NOW) launched and demonstrated live two of its innovative technology creations – the “NOW Broadband Cable TV” a guaranteed broadband Internet service with Wireless Cable TV, and the “NOWPlanet.TV” a digital media platform as a product that converges free TV, web channels, cloud services and other interactive services. 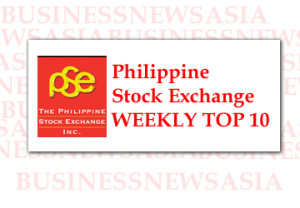 Mabuhay Vinyl Corporation (PSE:MVC) was the third biggest price gainer this week, posting a rise of 37.70 percent, although its 4-week total was still -9.29 percent.

F&J Prince Holdings Corporation “B” (PSE:FJPB) was also a big gainer this week, posting a week-long increase of 32.40 percent, which is also its 4-week gain.

Grand Plaza Hotel Corporation (PSE:GPH) entered the list of top 10 gainers this week after its stock increased by 24.26 percent, to trade at Php21.00 a share at the close.

Zeus Holdings Inc. (PSE:ZHI) did not release any material information this week but its stock soared 24.00 percent, bringing its 4-week total gains to 44.19 percent. Zeus’ stock traded at Php0.31 at the week’s close.

Global Ferronickel Holdings Inc (PSE:FNI) disclosed on Friday its fianncial and operating results for the 3rd Quarter, with net income of Php797 million, lower than the Php3.93bn net income it reported for the same period in 2014.

Despite the drop in net income, Global Ferronickel Holdings Inc’s stock managed to gain 20.43 percent this week, although its 4-week price change was only 4.67 percent higher.

On the 10th spot was Atlas Consolidated Mining and Development Corporation (PSE:AT), whose stock gained 20.25 percent this week, bringing its 4-week price change to 17.13 percent. – BusinessNewsAsia.com