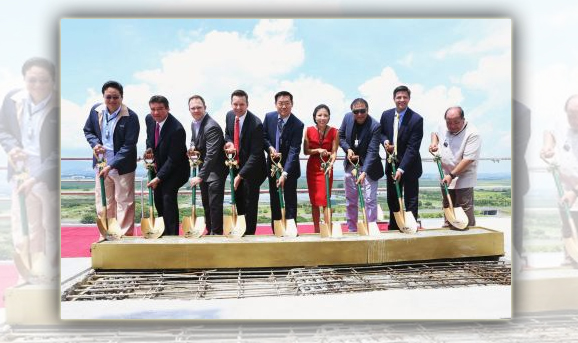 PHILIPPINES – Global Gateway Development Corporation (GGDC) has celebrated the topping off of two commercial buildings – One West and Two West – in the 177-hectare Global Gateway Logistics City (GGLC) in the Clark Freeport Zone.

In a statement, GGDC said GGLC is twice the size of Central, Hong Kong’s business district and the completion of the two buildings represents the first phase of the development of the 2.5-hectare West Aeropark.

GGLC is divided into four lifestyle zones consisting of its Aeropark Office Campus, Central Business District, Retail Center and Logistics Park. When completed the city will offer more than six million sqm of mixed-use development and will provide extensive employment for surrounding cities complementing the development of the Clark Freeport Zone.

West Aeropark will include a further three office towers with the five buildings delivering a combined gross floor area of 142,000 sqm. All five towers have attained pre-certified Gold status under the Leadership in Energy and Environmental Design (LEED) Core & Shell certification. West Aeropark is one of four parks in GGLC’s Aeropark Office Campus.

GGLC is located at the heart of Southeast Asia in the central plains of Luzon, just 60 minutes north of Metro Manila, inside the Clark Freeport Zone. The city is directly adjacent to Clark International Airport and is situated at the interchange of the North Luzon Expressway with the Subic-Clark-Tarlac Expressway, which connect Manila and the deep-water port at Subic with Central and Northern Luzon.

“We foresee the Clark Freeport Zone emerging as a new office and logistics hub for the Philippines. Businesses operating from the site will benefit from high-quality office space located in a well-designed, master-planned precinct within the Clark Freeport Zone with significant government incentives and connectivity to the rest of Asia,” says GGDC CEO Mark Williams.

For his part, GGDC President Michael Russel said: “We are excited to bring world-class buildings and amenities to the Clark Freeport Zone, which we believe will be the next major urban growth center of the country. Pre-leasing is already in progress in advance of the much anticipated opening of our One West and Two West buildings in May 2017.”

“Our West Aeropark campus provides best-practice benchmarks in urban planning and design, including abundant green spaces consisting of meticulously landscaped linear and pocket parks, further complementing the many pedestrian networks which meander through the master planned retail corridors of the campus,” he adds.

The topping off ceremony, held on October 18, was attended by the officers of GGDC, Clark International Airport Corporation, Clark Development Corporation and other government officials as well as numerous business leaders and representatives of global investment firms. (Please see below for a list of key attendees.)

GGDC was established in 2008, to develop and operate Global Gateway Logistics City. GGDC’s investors include leading investment funds from the Middle East and Asia. GGDC is focused on developing a green and sustainable city to offer premium office and commercial properties for lease. GGLC will be a world-class environment for employees and visitors focused on creating a harmonious live-work-play neighborhood. – BusinessNewsAsia.com