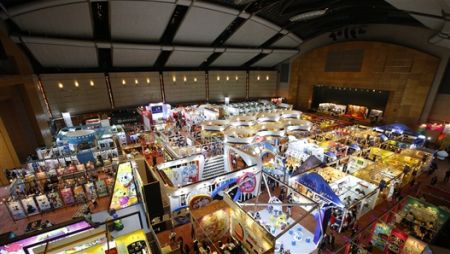 HONG KONG — Organised by the Hong Kong Trade Development Council (HKTDC), the 15th Hong Kong International Licensing Show, the world’s second-largest and Asia’s largest event of its kind, drew to a successful close today. The three-day fair (9-11 January) welcomed a record of more than 21,000 visitors from over 100 countries and regions, up four per cent over the previous year. The sixth Asian Licensing Conference (9-10 January), featuring 27 global licensing experts as speakers, drew more than 1,400 attendees.

HKTDC Deputy Executive Director, Raymond Yip, said the global licensing industry is flourishing, with the Asian market performing particularly well. He believes there is ample room for continued development and growth. “The licensing industry is diversifying. Properties now include such categories as lifestyle and fashion, characters, animation, edutainment, art and culture and food and beverage. Such widespread applicability suggests that the licensing industry will become more vibrant with keen demand for related supporting services. As the licensing hub for Asia, Hong Kong has a deep pool of IP professionals who can assist different companies to create and capture new licensing opportunities.”

Licensing opportunities abound on the Chinese mainland, and many international licensors are aiming to penetrate the mainland market. Claire O’Connor, Vice President Consumer Products and Retail Marketing APAC, Viacom International Media Networks, brought the company’s MTV and Nickelodeon brands to the show for the first time. Ms O’Connor said that the scale of the International Licensing Show made it an excellent platform for brands to introduce new characters and properties to the Asian market. She said the company’s Hong Kong, Malaysia and Indonesia agents also exhibited at the show to generate synergy. “Apart from introducing new characters and properties to our existing and potential licensing agents, we also refer potential licensees to them. Asia’s multimedia development is proliferating. There are many channels for broadcasting animation. Asia’s mega events, activities, theme parks, electronic games are all in need of new licensed characters. The market is huge,” said Ms O’Connor, who added that the company’s theme park in Foshan is expected to open in 2020.

Asia Animation Ltd.’s CEO Gordon Chin said his company’s participation in this year’s show was its largest so far. “The Hong Kong International Licensing Show is an ideal platform for launching new properties. We held a launch event on the first day and attracted many local manufacturers to explore licensing opportunities for both the Chinese mainland and Hong Kong markets. Among the properties featured, most manufacturers were interested in our licensed characters as they can be used in a wide array of products, including physical merchandise, online shows and performances.”

Internationally renowned Hong Kong jewellery brand Coronet was created by the Aaron Shum Jewellery Group. The brand exhibited at the show for the first time, with the aim of growing its licensing-related business and enhancing its brand value. Aaron Shum, President of Aaron Shum Jewelry Group, said jewellery brands can be applied to many high-end lifestyle products, such as wine, ties and silk scarfs. “Characters are always the highlight of the Licensing Show. It is not common for a jewellery brand to exhibit its properties, and for that reason we have attracted media attention. The Hong Kong International Licensing Show is a prime opportunity for us to showcase licensing possibilities in different areas. On the first day, we already met a mainland winery and a Japanese buyer. We are very pleased with the results.”

To provide an all-round food and beverage licensing experience for visitors, the HKTDC added three lounges to the show this year. The Van Gogh Senses, OMQ DININGROOM and Ori-Princess Cafe showcased their respective licensed characters and products and provided speciality menus. OMQ ZMEDIA (Beijoing) LTD, Group Marketing & Licensing Director, Elaine Wang said that, with next year being the 50th anniversary of the Hong Kong classic comic series, Old Master Q, they were seeking potential partners at the Licensing Show to discuss collaboration opportunities for the coming year’s anniversary celebration activities and events. She said Old Master Q is a highly revered brand among the Chinese community, appealing to different generations. The comic’s stature in Chinese culture is also recognised in the Western world. “We hope to introduce Old Master Q to overseas markets through the Licensing Show. On the second day of the show, we met an e-commerce company, a Hong Kong movie company and buyers from Vietnam, Thailand and the Philippines. We are very satisfied with the results.”

The booming licensing industry is attracting global buyers to capture the business opportunities in Asia. Maurizio Di Maggio, founder of LiBra Licensing & Branding, said his company is a master distributor and licensee of Italian brands and a sports, fashion and lifestyle licensing agency. “My partner and I come to the Hong Kong International Licensing Show every year to seek business partners. In the past, we have found regional distributors from Korea and Indonesia to release licensed fashion merchandise and toys for the Italian football brand A.C. Milan. This year, we have met regional distributors from Hong Kong, Korea and Southeast Asia. They are all sizeable companies. The Licensing Show is like a window that lets us see the latest conditions in Asian markets.”

Li Jia, manager of Beijing Fame Master Enterprise Ltd, said his company is a distributor of educational toys, particularly science teaching aids and 3D puzzles. Mr Li has come to the Hong Kong International Licensing Show for three consecutive years to look for global brands, such as Disney, Warner Bros and Marvel, and license their properties to produce limited collector’s edition 3D puzzles. “Once we have identified a suitable character, we would ask a Hong Kong company to purchase the rights from the licensor for us. It is easier to perform IP trading through a Hong Kong intermediary company,” Mr Li said.

The licensing industry is thriving in Asia. In 2015, Asian retail sales of licensed goods reached US$27.4 billion, representing 10.89 per cent of the global total. In addition to being a market with immense potential, Asia is also a cradle for creative talents and indigenous brands. The Chinese mainland is one of world’s fastest-growing licensing markets. It recorded US$7.22 billion in sales of licensing products in 2015, a jump of 23.8 per cent from the previous year. The surge was more than five times as much as the world average 4.2 per cent growth. It shows that the Chinese mainland is a major engine for the region’s licensing industry.

The HKTDC arranged for 65 Chinese mainland and overseas delegations and more than 1,000 trade representatives from 20 countries and regions to attend the Licensing Show. Over 600 business matching meetings were arranged, in collaboration with nine industry associations which they invited OEM manufacturers, exporters and retailers from different industries to explore new markets and opportunities in licensing and find new ways to upgrade and transform to enhance competitiveness.

During the show, the Asian Licensing Association staged the Hong Kong Licensing Awards 2016 with several brands of Licensing Show exhibitors being among the awardees. They include Beebipeace, B.Duck, GGO football, KEKE KAKA, Ori-Princess, Happiplayground and Qee.

The 15th edition of the Hong Kong International Licensing Show featured more than 900 brands and properties of 377 exhibitors from 12 countries and regions. Properties were displayed under the categories of lifestyle and fashion, characters, animation, edutainment, art and culture, and food and beverage. There were six pavilions from the Chinese mainland, Japan, Korea, Malaysia, Thailand and Taiwan. Many of the world’s top licensors and licensing agents also exhibited at the show, including Caterpillar, MTV, Nickelodeon, 20th Century Fox, Rainbow and Smiley.