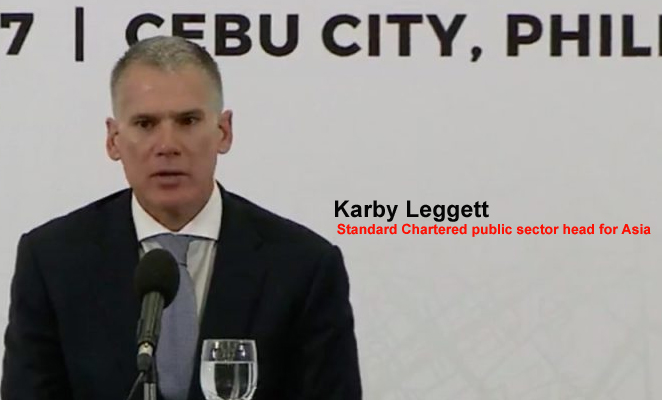 CEBU, Philippines – Credit worthiness of member-countries of the Association of Southeast Asian Nations (ASEAN) remain intact especially since the earlier feared slowdown of the Chinese economy did not materialize.

Standard Chartered public sector head for Asia Karby Leggett Thursday pointed this out as he weighed the impact of latest global economic developments on ASEAN economies.

In a briefing at the sidelines of the five-day 12th ASEAN finance and central bank governors meetings here, which ended Friday, Legette said China is now a major trading partner of ASEAN countries.

Fears of a slower output in Asia were high in recent years after the Chinese economy posted several quarters of below-expected growth, raising concerns that its economy is already over-heating.

In 2015, the world’s largest economy registered its 25-year low growth, as measured by gross domestic product (GDP) of 6.9 percent.

Last year, GDP slightly rose to 6.9 percent, which is within the government’s 6.5 to seven percent target.

These developments made Chinese authorities shift the country’s growth engines from being export-driven to one that focuses on domestic consumption on rising requirements of the affluent sector, among others.

Leggett said signs of improvement of the Chinese economy since the last quarter of 2016 “bodes well for the ASEAN economies.”

He also stressed that ASEAN economies have put in place policies aimed at ensuring that the countries have enough buffers against negative external developments.

For the Philippines alone, its strong foreign reserves was a plus, he said.

As end-February 2017, the country’s gross international reserves (GIR) reached USD 81.13 billion, enough to cover 9.2 months’ worth of imports of goods and payments of services.

Leggett said other countries in the region such as Thailand, Malaysia, and Vietnam had also improved on their foreign exchange reserves.

”I think that’s an overriding factor of making sure you have adequate external buffers to withstand a shock,” he added. – BusinessNewsAsia.com with PNA

Resiliency and optimism shine through in Vietnam across the video industry