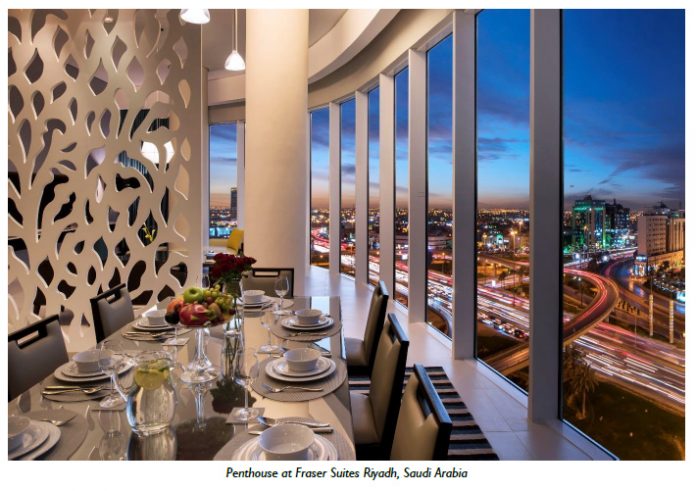 Frasers Hospitality, a member of Frasers Property Group, is opening in Saudi Arabia and Oman, this year, doubling its portfolio in the Middle East over the next few years.

With three more properties planned in Dubai, one in Jeddah, one in Al Khobar and one in Kuwait, Frasers Hospitality is set to double its footprint in the region to 13 properties over the next few years.

“It is timely for us to scale up in the Middle East. We have a loyal base of corporate customers and this has contributed to the success of our properties in Bahrain, Doha and Dubai, which are enjoying average occupancies of over 85%,” said Choe Peng Sum, Chief Executive Officer of Frasers Hospitality.

From now till 2020, the top three business travel markets in the Middle East are expected to be the UAE, Saudi Arabia and Qatar. Bahrain is also drawing large numbers of business tourists due to its hosting of conferences such as the World Islamic Banking Conference.

In a first for Saudi Arabia, the kingdom is planning to issue tourist visas from April as it pushes ahead with major economic and social reforms. A massive tourism project along its Red Sea coastline is also on the cards.

“Saudi Arabia is expecting more than 31 million tourist arrivals by 2027 as it commits to implementing Vision 2030, its most ambitious economic reform programme to date,” Choe pointed out.

Encouraged by such promising prospects, the newly opened Fraser Suites Riyadh aims to meet the needs of a growing financial district in the city where hospitality demands are largely driven by corporate clientele.

Located in Olaya, it provides easy access to top business and entertainment establishments as well as landmarks such as Kingdom Centre, which boasts the most luxurious brands in Saudi Arabia.

In a landmark move into Oman, Frasers Hospitality will soon launch Fraser Suites Muscat, leveraging on the increase in tourism investment as Oman diversifies away from an oil-based economy.

Scheduled to open in the second quarter of 2018, the 120-unit property boasts a prime location close to the upcoming Mall of Oman, the diplomatic area and Ghala industrial estate. Offering one-, two- and three-bedroom luxury apartments, residents have the choice of facilities such as a spa, fitness centre, rooftop pool and kids’ playground.