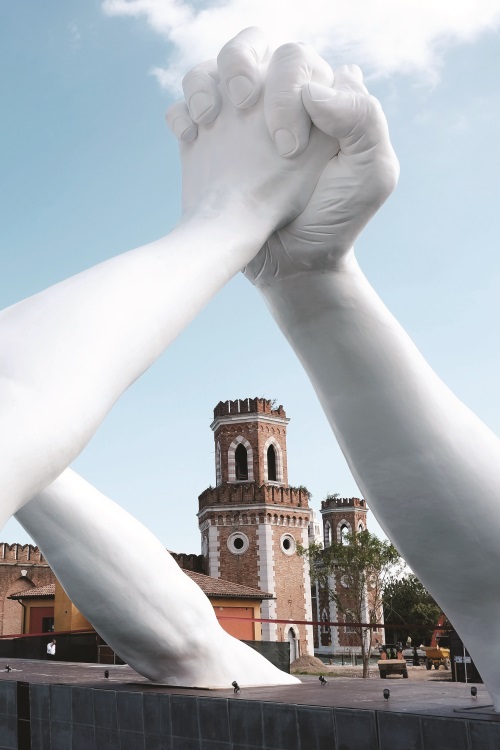 Internationally renowned contemporary Italian artist Lorenzo Quinn has unveiled his monumental Building Bridges sculpture in Venice. One of the most popular sculptors of our times, Quinn’s public art has been seen around the world depicting themes of love and human connection through his expressive recreation of figurative forms and human hands.

Building Bridges, the pinnacle of Quinn’s artistic expression to date, is installed in the basin of the Arsenale in the Castello District of Venice. Composed of six pairs of monumental hands, 15 metres high and 20 metres wide, the spectacular sculpture speaks to humanity’s commonality, with an emphasis of bridging differences in all aspects of life – geographically, philosophically, culturally and emotionally.

Lorenzo Quinn said: “Venice is a World Heritage City and it is the city of bridges. It is the perfect location to spread a message of world unity and peace so that more of us around the world build bridges with others rather than walls and barriers.”

“Each pair of the sculpture’s hands celebrate one of six universal human values: Friendship, to build on the future together; Wisdom, to make mutually beneficial decisions; Help, to cement lasting relationships; Faith, to trust in your heart and self-worth; Hope, to persevere in worthwhile endeavours; and Love, the fundamental purpose for it all.”

The leading figurative sculptor whose work is inspired by such masters as Michelangelo, Bernini and Rodin will exhibit in London at the Halcyon Gallery from 29 April to 30 June. The Halcyon Gallery has represented Quinn’s work for the past twenty years. With three galleries in London, Halcyon specialises in modern and contemporary art, and works closely with emerging and established international artists to produce world-class art exhibitions that translate to a global audience.

Director of Halcyon Gallery Ehud (Udi) Sheleg said: “Lorenzo has become one of contemporary art’s most compelling creators. We are proud to support him in fulfilling his dreams by turning his ideas into reality.”

President of Halcyon Gallery Paul Green said: “Lorenzo Quinn has always spoken a universal language, wherever in the world his artwork is placed it creates an immediate impact, whether it be in Mumbai, Venice, New York or Shanghai. Building Bridges is his most ambitious project to date both in scale and thought, and will send a unifying message of hope around the world.”

Building Bridges is open to the public in Venice’s Arsenale from May 10. For more information see www.lorenzoquinnbuildingbridges.com.

An exhibition showcasing a selection of Lorenzo Quinn’s iconic sculptures will also be open near Building Bridges from 11 May at Hanger 99, Arsenale, North Venice.