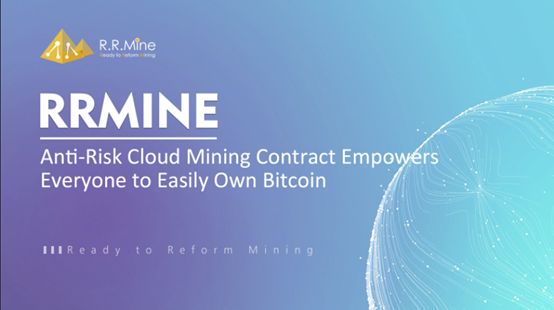 On October 10, RRMine attended WDMS 2019 (World Digital Mining Summit) hosted by BITMAIN, in Frankfurt, Germany. RRMine is a global cloud computing power asset management and trading platform that provides users with BTC cloud computing power mining services. Global CEO Tsou Yung Cheng delivered the keynote at the summit, explaining how RRMine has managed the market risk of Bitcoin mining for users through three years of operation, realizing the platform mission that “Everyone can easily own Bitcoin”.

1. Reducing user risk is the most important value of the cloud hash power platform

RRMine has been driven by user value, and the platform has surpassed 50,000 miners worldwide. With the rise and fall of the cloud hash power industry, RRMine also found that in recent years, cloud computing has become the best way for users to enter the world of cryptographic assets, but the current status quo in the industry is still “the market counts”: the rise and fall of the digital crypto market determines the life and death of the platform. If the platform cannot control its own risks, how to protect the value of users?

1) After several mining disasters in the bear market, the platform never closed.

2) 90% of platform users come from the traditional asset world. The promotion of new industries is achieved through more stable and friendly products.

3) 60% of users hold computing power contracts for more than one year.

4) Cloud hash power platform contract sales price has never changed in the past three years, and is not affected by market fluctuations in various industries.

The stability of the comprehensive operational capability can help users to overcome risks and obtain stable mining capabilities.

2. Emerging market users pay attention to risks. Capitalization of hash power is the only way.

CEO Tsou Yung Cheng discovered from the operation and proposed that the key to the development of cloud hash power and digital mining is how to introduce users from the larger market of traditional assets into emerging markets. What are users concerned about now? They are eager for new assets but hate risk. This is the problem.

The essence of RRMine’s hash power contract design is to realize the capitalization of hash power. Assets are free, flexible and mobile. Let hash power change from resources to assets that everyone can control.

Through the global platform operation, not only the stability of production is guaranteed, but also the overall cost of mining is greatly reduced.

The global standardized cloud hash power contract sales and trading services, positioned as “global cloud hash power asset management and trading platform”, have attracted the public’s attention. Although they don’t know much about the block chain, RRMine’s product design is simple, stable, and reliable, so that ordinary users understand and are willing to participate.

3. Looking ahead, the assetization of cloud hash power will enable the free flow of hash power worldwide.

CEO Tsou Yung Cheng concluded, “RRMine’s stable cloud hash power platform comes from the hash power of our large mines distributed around the world. Among them, our U.S. mines in Ohio were honored among the ‘TOP10 Most Beautiful Mines in the World’ by the WDMS, which is a quality affirmation of the platform’s operational and technical capabilities.”