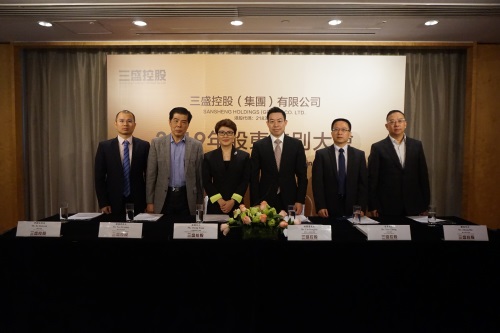 Sansheng Holdings (Group) Co. Ltd. (“Sansheng Holdings” or the “Company”, together with its subsidiaries, collectively referred to as the “Group”; stock code: 2183.HK), is pleased to announce that at the extraordinary shareholders’ meeting held on 13 December, 2019 a high vote of 92% shareholders approved the acquisition of Fujian Shengchuang, Fuzhou Hongsheng, Fujian Tianren, and Zhangzhou Deyousheng, for a consideration of HK$231.0 million. The completion of this round of acquisition transactions by the Group concludes the first round of asset injection by Sansheng Holdings. The significance of this is that the land reserves and saleable project resources of Sansheng Holdings is further enlarged, providing new momentum for added profitable growth in the future.

After the subsequent reorganisation, Sansheng Holdings will own a number of property assets in Fujian Province, China held by the controlling shareholder. The injection of property projects by Fujian Shengchuang, Fuzhou Hongsheng, Fujian Tianren and Zhangzhou Deyousheng will boost the Group’s land reserve, hence substantially increase saleable land reserve area by more than 430,000 sq m with a saleable gross floor area of over 1,000,000 sq m. Both the large number and scale of these projects will create huge room for growth in the Group’s results and is also conducive to its intensified development in economically vibrant regions such as the West Coast Economic Zone, Yangtze River Delta Economic Zone and Bohai Economic Rim. In addition, the robust growth in both residential and commercial properties and diversified businesses are expected to become significant income streams and further strengthen the influence of the Group’s brand.

Sansheng Holdings actively implemented the Group’s strategy to identify land in prime locations suitable for property development and investment in order to increase its land reserve and further promote development of the Group. The Group has acquired land plots in different cities across the PRC through acquisition and land bidding. As at 30 June 2019, the Group had a total of 15 property projects under development or held for future development, and the total site area of the land bank was approximately 796,554 sq m with the estimated total GFA of the land back approximately 2,513,901 sq m. In addition, three property projects located in Fujian province launched pre-sales during the first half of 2019, achieving a satisfactory performance. The turnover of Sansheng Holdings is expected to further soar in the near future along with the injection of acquisition projects.

Sansheng’s Directors are confident about the sustained development of the property market in Fujian Province, and the Company will continue to seek new opportunities for property development, especially the residential property development in the PRC. The Directors are of the view that the acquisition provides a good opportunity for the Group to supplement its land reserve in Fujian Province, in line with the Company’s strategy. Also, the terms of the Acquisition are fair and reasonable and in the interests of the Shareholders as a whole. The first round of capital injection will further enlarge the land bank of Sansheng Holdings, optimise the structure of its business, extend the geographic footprint of its projects and increase the revenue of the Company. In the future, Sansheng will continue adhering to its strategy of “Targeted Investment, High Caliber Team, Superior Products” in order to spur the Group to achieve excellent operational efficiency and outstanding profitability, and maximise the returns to its shareholders.”