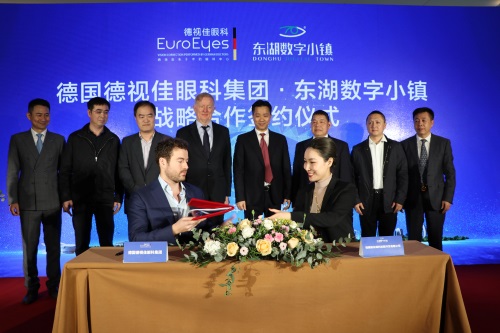 EuroEyes Fuzhou Clinic is the Company’s eighth clinic in China after Shanghai, Beijing, Guangzhou, Shenzhen, Hangzhou, and Chongqing. EuroEyes Fuzhou Clinic is located on the third floor of FFC Fuzhou Future Center in East Lake Digital Town of Binhai New City, with an area of 800 square meters and an investment of over RMB10 million. The clinic is expected to commence its operation in October 2020, which is also committed to providing the high- quality German ophthalmology services for Binhai New City and the entire Fuzhou.

According to preliminary survey by the Fuzhou Statistics Bureau, Fuzhou achieved gross domestic product (GDP) of RMB352.853 billion in the first half of 2019, representing an increase of 8.5% year-over-year. Fuzhou is the second largest prefecture-level city in Fujian Province with GDP growth rate exceeding 8% for 8 consecutive quarters. In recent years, Fuzhou has even deliberately created a “Digital Fuzhou” and made every effort to develop new economy industries. The East Lake Digital Town, where EuroEyes opens its Fuzhou Clinic, is the new economic and industrial base of the central business district that the city has been deliberately developing. As of now, the East Lake Digital Town has attracted nearly 20,000 well-known Chinese and foreign digital enterprises in the high-tech field, including Microsoft, Starbucks, Alibaba, Tencent, and Huawei to set up their footprints in the area, forming a high-end business circle. It is expected that when the town is fully constructed in 2021, it will attract more than 1,000 digital enterprises to settle in and create over RMB100 billion of asset value. In the meantime, the presence of EuroEyes in the East Lake Digital Town also helps introducing the authentic German refractive ophthalmology technology into Fujian and propelling economic development in the region by utilizing the cutting-edge international ophthalmology technology and services. EuroEyes is a giant in the ophthalmic medical industry, with a strong team of professional ophthalmologists, advanced diagnostic equipment, and international high-quality ophthalmic diagnostic services. With the opening of EuroEyes Fuzhou Clinic in the town, it will benefit patients with various refractive diseases in Fuzhou Binhai New City and even the whole Fuzhou to enjoy high-quality ophthalmology services and to resume their clear vision for higher quality of life.

EuroEyes was established in 1993 and is one of Europe’s leading brands in the vision correction industry as well as a leading refractive ophthalmology brand in Germany and Europe, headquartered in Hamburg, Germany. EuroEyes is operated by famous German doctor Dr. Jorn Slot Jorgensen, and was awarded with many Ophthalmology prizes. EuroEyes currently operates 27 eye clinics and consultation centers in Germany, Denmark and China. According to the report of BOCI, EuroEyes was awarded with World Champion – Most Trifocal Lens Implants, European Champion – Most ICL Implants and German Champion – Most ReLEx SMILE Procedures in 2018. EuroEyes is a market leader in advanced lens exchange surgery and refractive surgery (excluding PRK / LASEK) in Germany and Denmark. In 2018, EuroEyes’ market share in Germany and Denmark was 13.2% and 10.8% respectively.

In recent years, the morbidity of various eye diseases in China has increased year by year, and the ophthalmic market has grown rapidly. Statistic data shows that from 2013 to 2017, the size of China’s ophthalmology market increased from RMB46.77 billion to RMB86.7 billion, and the CAGR during the period reached 17%. It is expected that the size of the ophthalmology market will expand at a CAGR of 13% -15% in the next five years. Since entering China in 2013, EuroEyes aims at providing advanced German technology and 100% German services to patients with myopia, hyperopia, presbyopia and cataracts, allowing them to resume a clear vision. Up to now, EuroEyes has successfully completed over 400,000 ophthalmological surgeries and help patients retaining clear vision in Europe and China without glasses. Among such patents, there were many entrepreneurs, celebrities and high net-worth individuals. According to Financial Report of EuroEyes, the revenue of China region in 2018 was approximately RMB94 million, accounting for 28.2% of the overall revenue of the Company. From 2016 to 2018, the CAGR of revenue and gross profit in China region was 85.1% and 633.7% respectively.

Dr. Jorn Slot Jorgensen, the Founder, Chairman of the board and CEO of EuroEyes said “EuroEyes is very honored to be in East Lake Digital Town, bringing German ophthalmology technology and quality services to the people in the town and nearby districts. The East Lake Digital Town is the innovative center of China’s digital economy while EuroEyes has also been committed to innovation in the field of refractive technology. Through the cooperation with the management of the town, I sincerely look forward to improving medical technology and quality in the region, as well as create the momentum to the future development of the town.”.

EuroEyes Fuzhou Clinic is another strategic development following EuroEyes’ successful listing on the main board of the Hong Kong Stock Exchange, showing its strategic determination to enter the China market and its high recognition of the sustainable development of the Fuzhou market. With the signing ceremony of Fuzhou Clinic successfully held, EuroEyes will utilize its unique advantages of “German doctors and German quality” to provide patients in Fuzhou and the surrounding cities with high-quality ophthalmology services and strive to improve the eye health-care level and quality of life of residents in China.