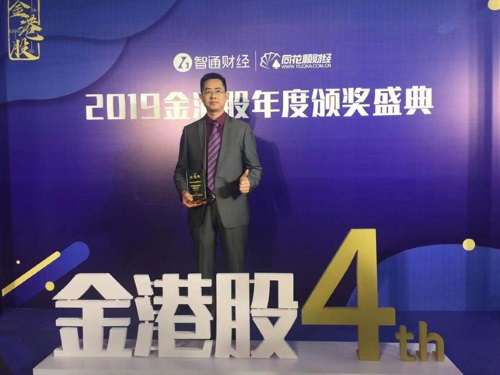 SinoMab BioScience Limited (“SinoMab” or the “Company”, together with its subsidiaries, the “Group”; stock code: 3681.HK), a Hong Kong-based biopharmaceutical company dedicated to the research, development, manufacturing and commercialization of therapeutics for the treatment of immunological diseases, is pleased to announce that the Group has won the title of the “Most Popular Newly Listed Company” at the 4th Hong Kong Golden Stocks Awards held in Shenzhen.

The 4th Hong Kong Golden Stocks Awards was jointly organized by Zhitongcaijing.com, China’s leading information platform focusing on Hong Kong and US stock markets, and 10jka.com.cn. The “Most Popular Newly Listed Company” award aims at recognizing companies had been listed on Hong Kong Stock Exchange since 1 January 2019 with significant recognition from the industry, high participation of investors and excellent performance in capital markets. Being awarded the “Most Popular Newly Listed Company” demonstrates the industry and investors’ close attention towards biotech industry and is a great encouragement and motivation for SinoMab’s future success. SinoMab, as the first Hong Kong-listed local biopharmaceutical company, possesses several first-in-target and first-in-class drug candidates. As the drug candidate coming the closest to commercialization, the Company’s flagship product SM03 is currently in Phase III clinical trial for RA in China and is expected to be marketed in 2021 the soonest. According to the latest statistics, approximately 300 patients have taken the treatment trial. Meanwhile, the Company has proactively carried out long-term development plan. Its Suzhou production base is expected to be put into operation by the end of 2021 to satisfy the commercialized production requirements of drug candidates in the future.

After three months of strict screening, the 4th Hong Kong Golden Stocks Awards attracted over 860 Hong Kong-listed companies to participate, covering emerging industries such as TMT and healthcare. The award is a recognition of SinoMab’s R&D strengths, business model and industry influence from the market and investors and will help improving the Company’s reputation in the capital market.

About SinoMab BioScience Limited
SinoMab BioScience Limited (“SinoMab” or the “Company”, stock code: 3681.HK) is dedicated to the research, development, manufacturing and commercialization of therapeutics for the treatment of immunological diseases. The Company’s flagship product SM03 is a potential global first-in-target mAb against CD22 for the treatment of rheumatoid arthritis and is currently in Phase III clinical trial for rheumatoid arthritis in China, which has been recognized as one of the significant special projects of Significant New Drugs Development of the Twelfth Five-Year Plan Period and the Thirteenth Five-Year Plan Period. In addition, the Company possesses other potential first-in-target and first-in-class drug candidates, some of which are already in clinical stage, with their indications covering rheumatoid arthritis, systemic lupus erythematosus, non-Hodgkin’s lymphoma, asthma, and other diseases with major unmet clinical needs.