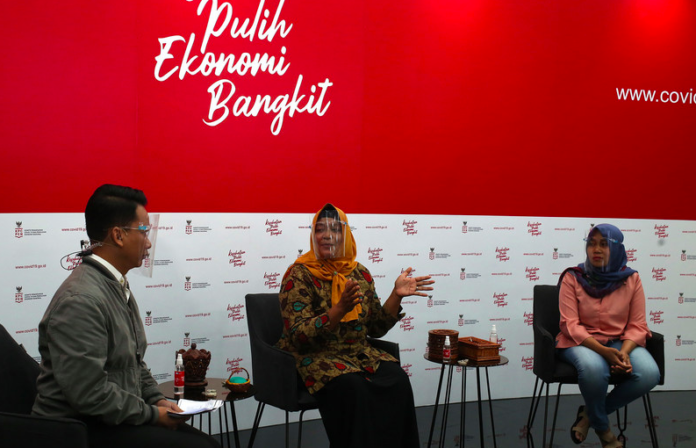 The Indonesian government strives to rescue microenterprises from the impact of the Covid-19 pandemic.

Given its vital role, the microenterprises sector has become a priority in the national economic transformation which is also supported by the Covid-19 Handling and National Economic Recovery Committee (KPCPEN).

This was revealed in the “Dialog Produktif” dialogue with the theme “The Frontline Fighters for the Economy: Micro-Business Entrepreneurs” which was held by KPCPEN on Monday (9/11).

he government launched the Bantuan Presiden Produktif Usaha Mikro (BPUM/Productive presidential aid for microenterprises) in August 2020. As of October, BPUM has reached around nine million microenterprises. Meanwhile, each BPUM recipient receives Rp2.4 million in grants. For the next step, the total number of microenterprises who will receive these grants will increase to 12 million.

“Alhamdulillah, after receiving BPUM, I was able to expand my food stall. I was also able to start a gorengan (fritters) business. I utilized the vegetables my mother sells so that they do not go to waste,” said Iis Suminar, a pecel, karedok, gado-gado (Peanut sauce-based salads) entrepreneur who received BPUM, at the “Dialog Produktif” dialogue with the theme “The Frontline Fighters for the Economy: Micro-Business Entrepreneurs” which was held by the Covid-19 Handling and National Economic Recovery Committee (KPCPEN).

BPUM was initiated by the government to help microenterprises who have not yet been reached by banking services (unbankable). Offered in the form of grants, BPUM also serves as an alternative financing scheme for microenterprises. According to the latest data from the Ministry of Cooperatives, Small and Medium Enterprises (KemenkopUKM) in 2018, the number of business units at the national level was recorded at around 64 million, and microenterprises take up the largest portion which was around 63 million (98%).

As one of the unbankable, Iis really felt the benefits of this government aid. Iis, who sells gado-gado everyday, has never used an ATM. In order to obtain BPUM, Iis ventured to ask the village authorities, then visited the bank to fulfill the necessary requirements. Initially, Iis was hesitant to visit the bank. “I asked the bank security about the UMKM (SMEs) funds. You see, I first got the information from social media,” Iis explained. – BusinessNewsAsia.com