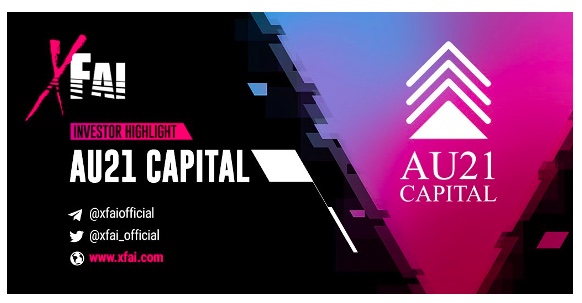 AU21, one of the most reputable venture capital firms in the world focusing on blockchain and digital assets, has decided to partner with XFai through a strategic investment. The partnership comes at an important time, as XFai’s proposed changes in the DeFi space are quickly gaining momentum as the project’s public token sale — referred to as Liquidity Generation Event (LGE) — is quickly approaching. AU21 is proud to be bound to XFai by providing its support and access to its network for XFai to reach a wider audience within the DeFi space and help revolutionize the industry.

XFai is a project set to chart a new course for how investors and projects interact within the DeFi ecosystem. It develops various tools that chart the liquidity depth and the order book of both DEX (decentralized exchanges) and CEX (centralized exchanges). Using its native-built DLO (DEX Liquidity Oracle), XFai shifts the liquidity between DEX and CEX dynamically to allow investors on DEX to benefit from free-flowing token liquidity, ultimately freeing the investors to enjoy optimized trading grounds on decentralized exchanges. XFai’s DLO is equipped with anti-slippage technology and an efficient one-sided provisioning, allowing both investors and liquidity farmers to minimize costs while enjoying transparency that shows the actual impact of their trading actions. Moreover, DLO allows partnered small and mid-cap tokens to benefit from APY earnings, allowing holders and projects to gain a bolstered income by choosing to stake their tokens in the liquidity pool.

AU21, the newest investor to be announced as part of XFai’s increasing list of stellar venture capital partners, has an impressive track record of leading projects to astounding success. Founded in 2017, AU21 quickly rose to become one of the most renowned names in the blockchain space. The venture capital firm has been involved in the success of various projects such as the Graph, Synthetix, Centrifuge, Polkadot and Elrond.

“We are proud to announce our backing of XFai and their autonomous liquidity management solution for cryptocurrencies. The DEX Liquidity Oracle achieves several technological milestones in decentralized liquidity provision, and will serve to create a more efficient and accessible marketplace for digital assets,” comments AU21.

XFai is set to open the doors to public investors on April 8 through its Liquidity Generation Event (LGE). Unlike traditional Token Generation Event (TGE), the LGE is designed to allow participants to purchase the XFIT tokens and stake them in the liquidity pool in one step and one interface, compared to the normal procedure which would involve up to 4 steps and the hassle of navigating multiple interfaces. The unique launch mechanism, developed by XFai, is expected to set a new standard on how tokens are offered to the public. The LGE also dramatically lowers the likelihood of failed transactions, protecting the participating investors from paying high gas fees for those transactions. Moreover, the one-step mechanism is designed to save the participants from paying exuberantly high gas fees, which has been severely affecting the recent DeFi space. XFai’s XFIT LGE is set to launch on April 8, 2021.

We thank the support of AU21, and look forward to changing the current DeFi landscape for the better through the guidance of AU21.

XFai develops tooling for the DeFi space, graphing it to build game-changing products. The XFai DLO is set to invite mid and small-cap tokens to start earning APY on their token holdings, while the XFai LGE is set to become industry-first in providing a more efficient, transparent, and fair way for everyone to get involved at an early stage. The LGE for XFai’s native token, XFIT, is set to launch on 8th April 2021. We invite everyone to join the DeFi revolution, spearheaded by XFai.