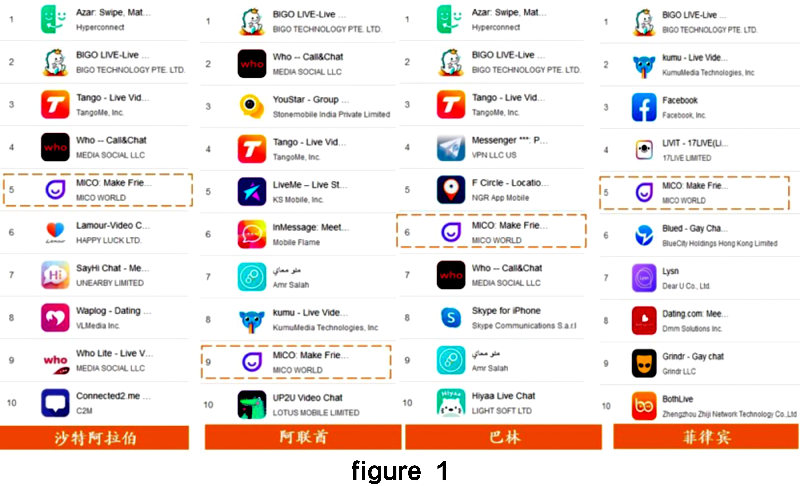 Youth tend to move with anything new. So although Facebook has an absolute advantage in the global social field, Snapchat and Twitter still have room for development. With the continuous development of the Internet, a new generation of young users has a higher acceptance of video and audio, and a new generation of open social apps has also emerged.

The great potential of strangers socializing

Since its listing in 2019, the changes in Newborn Town have been earth-shaking. Founded in 2009, its founder Liu Chunhe always cherished the dream of changing the world with Internet products. In 2013, Newborn Town began to expand overseas, since then overseas markets have become a company core strategy.

In the initial stage of going overseas, the company quickly accumulated internet tools, with hundreds of millions of users in the world. However, as the inherent shortcomings of tools, such as low stickiness and user duration, have been recognized by the capital market, the valuation of mobile Internet tools is at a low ebb, which is also a reason the share price of Newborn Town is still not high after its listing.

However, in 2020, Newborn Town engineered a magnificent makeover. The company’s core development strategy was successfully upgraded and the company seized the opportunity for open social networking with audio and video social products including Yiyo, MICO and YoHo. The average monthly active users of social platforms were about 11.36 million, and they are still growing rapidly.

In early 2021, when the market began to reassess the company’s stock, its price skyrocketed from HK$1.70 to a peak of HK$11.54. The price fell back, but is around HK$4.30, still up more than 200% from last year’s low. If the stock price of Newborn Town has risen sharply, will there be a bubble? It depends on strong performance.

On March 24, the company released its earnings for 2020. Revenue came in at CNY1.18 billion, an anual increase of 203.2%, net profit of CNY110 million represented an increase of 67.1%. Newborn Town’s current stock price is HK$4.3, with share capital of 999 million shares, and a market valuation of about HK$4.3 billion, or CNY3.6 billion. Compared to the growth in 2020 revenue and net profit, the share price is not expensive at all.

How was Newborn Town able to upgrade in just a year? In fact, Newborn Town began to lay out open social networking a few years ago. In 2016, the company incubated MICO, a social product aimed at overseas markets. After several years of rapid development, MICO has achieved rapid revenue growth and achieved profitability.

MICO ranked second as China’s overseas social networking platform. According to official data from MICO, the platform currently covers more than 150 countries and regions around the world, has entered the top 10 App Store bestsellers in 92 countries and regions, and has accumulated hundreds of millions of successful pairings.

On July 2, Sensor Tower, the mobile app data company, announced China’s Top 20 Short Video / Live Streaming Apps for the First Half 2020. MICO was once again on the list, ranking Top 20 in terms of download volume and revenue. Sensor Tower pointed out that with the global pandemic, people were seeking entertainment and socially networking online, with related apps ushering in an explosive round of growth in 2020.

In fact, MICO, which includes the live broadcast module, has been on the list many times before. In Q1 and Q2 2019, MICO continued in Sensor Tower’s Top 20 for overseas revenue of China’s Short Video / Live Streaming Apps, ranking firmly in the Top 10. Last year, MICO entered the list again ranking No. 6.

Yiyo, the company’s video social product, aims at differentiation and creates social scenes in the form of video matching and one-to-one video chat, which is loved by young users. This product is among the top 20 of Google Play global social app download list in 2020, with a total of more than 50 million downloads.

By 2020, the average monthly active users of social platforms were about 11.36 million, and they are still growing rapidly. By the end of 2020, Newborn Town had a ‘super-traffic ecology’ with 1.2 billion users, and it was monetizing its ‘traffic + X’ business model on a global scale. In terms of core strategy, the company was focusing on stranger social business, supplemented by multiple businesses such as games.

After the stocks rise, it was still undervalued, and it may be the next tenfold gainer.
Although Newborn Town’s stock price has risen sharply recently, compared with similar companies, the company’s stock price is still seriously undervalued.

For example, Yalla, which has a business model similar to that of Newborn Town, was successfully listed on the New York Stock Exchange in October 2020 with a share price of US$20.3 and a market value of about US$3 billion by virtue of its product Yalla’s success in the Middle East.

According to the latest financial report of Yalla Group Inc, in the fourth quarter of 2020, Yalla, the company’s core social networking product, had 6.4 million monthly live users, which is only about half of the 13.18 million monthly live users of social networking platform of Newborn Town Technology in the fourth quarter of last year.

Through a comparison of monthly user data and financial data of the two companies, it is obvious that Newborn Town has greater potential and more stable financial data. But as the market has not fully recognized the potential of Newborn Town’s social networking platforms, the company’s share price is still seriously undervalued. Moreover, Newborn Town’s platforms have outstanding performance in many countries, and the long-term potential is undoubtedly greater than that of Yalla, which is only deployed in the Middle East and North Africa.

From the characteristics of the US and Hong Kong stock markets, the HK market is less friendly to small-cap companies. In addition, the HK market doesn’t fully tap the potential of Internet technology stocks, as leading blue-chip stocks are the market favorites. In the U.S. stock market, there are social media leaders like Facebook, and alternative social media companies such as Snapchat, Twitter, Match Group, and Pinterest. The U.S. stock market understands the business models and the growth potential of such companies.

Of course, there is a huge gap between the two companies in terms of market value. On the other hand, it is also because Yalla Group has been on the market for less than half a year and there are fewer circulating shares.

Frankly speaking, with the current user data and financial data of Newborn Town, the valuation on the primary market should definitely exceed US$1 billion. According to the normal secondary market valuation, even with the most conservative estimate of 50% off, the market value of Newborn Town should be about US$1.9 billion, and the corresponding stock price about HK$15, which is 10 times last year’s low of 1.5 Hong Kong dollars!

Going to sea is at the right time, with certainty and growth

The success of Newborn Town going overseas is not only a miniature of Chinese Internet companies going to sea, but also a typical successful case.

According to Senser Tower data, Chinese Internet companies will return with a full load from overseas markets in 2020. For the first time, the total revenue from China’s overseas mobile travel market will exceed US$10 billion, with the highest growth rate is in the world. Revenue from the top 30 mobile travel products will reach US$9.2 billion, up 47% this year, while revenue from Tiktok, by Byte Dance, of US$1.26 billion, has increased 590%.

The development of Chinese Internet companies is similar to that of mobile phone companies. After the bloody fight in the domestic market, with the “all-in-one martial arts” trained in the domestic market, China’s Internet companies can make a big show in the overseas market through localized operations, such as Tiktok under Byte Dance. The overseas market has also given Chinese manufacturers ample room for development.

From another point of view, some domestic Internet companies, such as Momo, have missed opportunities for overseas development, which have hindered their development and their market value continued to fall.

For Newborn Town 2020 was undoubtedly a very successful year. The company transformed from a software tools company to a social product company, achieving a gorgeous upgrade, and the capital market has repriced the company. The company’s share price has risen by 200% from the lowest point.

From the perspective of the company’s development, high-speed growth in 2021 can still be expected. As the company’s revenues and profit continue to increase, the capital market will change the underestimation of the company. In the long run, Newborn Town Technology has a chance to become another tenfold stock.