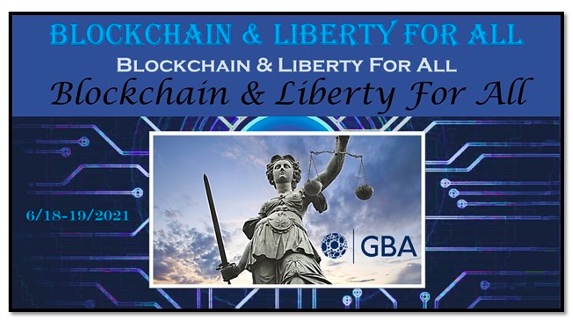 Live from Washington DC, GBA will host a virtual gathering of members to celebrate the accomplishments of 2020 and plan our trajectory going forward. Join us, June 18-19, as the GBA hosts, BLOCKCHAIN AND LIBERTY FOR ALL, streaming virtually to cities around the world.

In commemoration of June 19th, also known as Freedom Day, Juneteenth is a U.S. holiday celebrating the emancipation of African Americans still held in slavery in Texas in 1865, more than two years after the Emancipation Proclamation had officially outlawed slavery. This 2-year delay came from a deliberate withholding of the news of freedom, chaining thousands of slaves with a lie. Today we have an abundance of news, 24/7, on multiple channels. But are we getting the truth, or is it fake news? Without verification, can we trust the data? Blockchain is a specific type of database in which blocks of data are chained together in chronological order, immutable, irreversible, and viewable to anyone. No data goes into a block until the entire community sees it and verifies it. Blockchain as a system can provide verification, trust, and liberty for all. Hence the theme of this year’s GBA annual meeting, Blockchain and Liberty for All.

The Government Blockchain Association, GBA, is a global business association with chapters in 120 cities around the world. In only a few short years, the GBA has risen from a local meetup to an international association of blockchain innovators and government policy makers with over 50 Working Groups including:

Leaders from GBA Africa, Middle East, Asia-Pacific, Europe, South America, US, Canada, and India will give yearly updates. Eric Guthrie, Esq., GBA Director of Training and author of Diversify or Die, will give a Keynote on ‘Journey to Freedom’. Technology, the Token, Fair and Honest Elections, and Blockchain and Equal Opportunity will all be discussed.

“Political freedom must be accompanied by economic freedom for people to be truly free. Blockchain Technology is a new frontier in the economic landscape.” says Gerard Dache, Executive Director, GBA.

Blockchain technology does not discriminate between color, gender, age, nationality, or background (education). This new technology presents an opportunity for all who want to embrace it. Join GBA on June 18-19 as we discuss our yearly update.

For more information go to Blockchain & Liberty for All (www.gbaglobal.org/event/blockchain-liberty-for-all)