On May 28, the Sanmenxia Government, with the Association of Industry Service Robots and BooCax Robotics, a national robotics company, hosted the Service Robot Industry Summit in Sanmenxia, Henan Provence, to discuss the latest developments in service robot technologies and artificial intelligence and automation. The Summit ended with the launch ceremony of the BooCax Robotics plant in Sanmenxia’s Economic Development Zone. 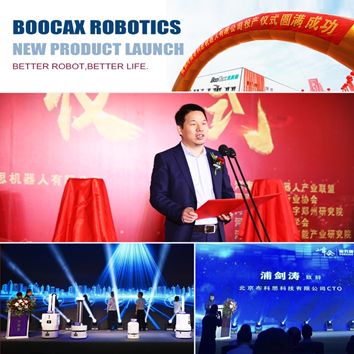 The Summit was attended by new medias, industry authorities and investors. Experts from the industry, including specialists from the Chinese Academy of Sciences (CASIC) and Chinese Center for Disease Control and Prevention (CDC), expressed opinions on the current AI technologies and discussed the development of mobile service robots, while BooCax Robotics introduced recent products including disinfection robots and cargo-carrying robots.

Equipped with an autonomous navigation system, these BooCax robots accomplish delivery or disinfection tasks smoothly. The disinfectant-spraying robots and UV-sterilizing robots contributed to the fight during the Covid-19 pandemic, following the cargo-carrying robots Oryx and Mini Hamster which have become popular in the market.

BooCax Robotics new 14,000-square-meter plant in Sanmenxia consists of two production lines and an R&D center. The new plant can secure a 1000+ unit annual output with testing and sales services. Sanmenxia City, a key area in the Belt-and-Road initiative, serves as an important transportation hub for Henan, Shanxi, and Shaanxi provinces.

Setting up the fourth subsidiary with an RMB 180 million investment in Henan after Shenzhen, Shandong and Chengdu marked the strategic expansion of BooCax Robotics. At the launch ceremony, Mr Xie Chuanquan, BooCax Robotics CEO, declared the company’s mission as ‘Better Robot, Better Life’.