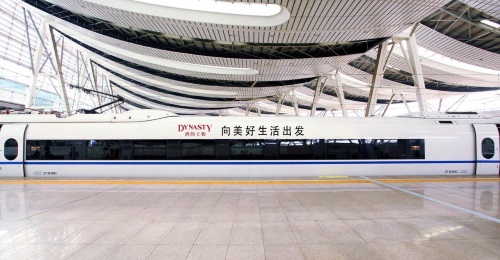 The significant increase in Dynasty’s revenue during the Period was mainly attributable to three factors: Firstly, as the COVID-19 pandemic has gradually been brought under control in China, the government has relaxed the restrictions on consuming places, which has boosted the resumption of consumption occasions and consumer sentiment, as well as the rebound in sales resulting from economic growth, particularly in terms of the growth in domestic demand. Secondly, compared with the same period last year, sales of medium to high end wine products increased during the Period following the Group’s upgrade of its brands and products. Thirdly, the Group’s sales team strengthened its cooperation with distributors, which purchased goods before festivals. This also demonstrated that the Group achieved phased progress through the implementation of sales and marketing reforms.

This year, Dynasty has continued to focus on brand and product upgrades, sales and marketing reforms, and brand promotion. In terms of product strategy, the Group is further advancing its “5+4+N product strategy”, in which “5” represents the five key product lines, namely the air dry series, seven-year reserve series, merlot series, classic series and best-selling series, to achieve the goal of full coverage across all mainstream price segments; “4” refers to the four dominant categories i.e. dry red wines, dry white wines, brandy and sparkling wines, to vertically increase the market share; and “N” stands for the development of various customized products to meet the diversified consumption needs of consumers in China.

Dynasty has launched three new products under its brandy series and upgraded the existing dry red wines and medium dry white wines series to promote sales of medium to high end wine products. It is also developing a young product series which it plans to sell via e-commerce channels. The Group held its first brandy tasting and business fair event this January and also took part in China Food & Drinks Fair held in Chengdu this April. During the fair, the Group actively promoted its latest product mix, which covers all product lines, and received an enthusiastic market response.

As for marketing, Dynasty has stepped up its efforts in brand promotion and advertising investment. Since March of this year, Dynasty has title sponsored a high-speed train which makes 49 trips a day across 13 provinces and municipalities, taking passengers to and from core areas of Jiangsu, Zhejiang and Shanghai – Dynasty’s key markets. The Group has also launched marketing efforts at offline points of sale in the Jiangsu-Zhejiang-Shanghai region, as well as via its flagship online stores on JD.com and TMall, enabling the rollout of nationwide sales and marketing activities which delivered satisfactory results. Meanwhile, Dynasty has continued to expand its distribution channels, including tobacco and liquor shops, convenience stores and medium and large supermarkets, catering outlets and social communities. While fortifying the foundation of its traditional sales channels, it also penetrated social communities by flexibly organizing interactive and thematic activities and engaging opinion leaders and content marketing, so that it may have the benefit of diverse yet fully integrated channels. Dynasty will continue to press ahead with its mass-scale marketing campaign, encompassing advertising in 20,000 shops, hosting 1,000 wine tasting events and organizing 100 plant visits, in order to continue building and enhancing its point-of-sale network.

Looking ahead, Dynasty will address consumer demand through the constant innovation of its wine series. At the same time, it will increase investment in brand development so as to fully vitalize its brand. Moreover, it will drive development of its major products by steadily enhancing quality and controlling prices to boost sales volumes, with the overall aim of bringing Dynasty’s wines to more consumers in China.