Yeahka Limited (Yeahka or the Company) (HKG: 9923), a leading payment-based technology platform in China, has surpassed others to become one of the most-used aggregate payment service providers by merchants in China. 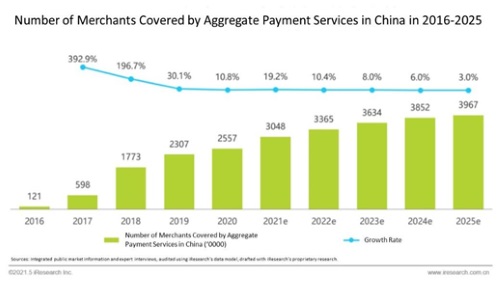 Yeahka’s interim results show, as of the first half of this year, the total number of active merchants using the Company’s payment services has reached 6.13 million, up 30.8% year-on-year (YoY). Its daily peak count of QR code payment transactions has reached 42 million, compared to 30 million at the end of last year, leading to a rapid increase in its market share in the non-bank independent QR code payment services market. According to Oliver Wyman, Yeahka ranked second with a market share of 14% in China, according to the number of transactions in 2019.

Based on analysis of the latest open data of other key players, Yeahka has surpassed its competitors to become the largest non-bank independent QR code payment services provider by market share in China.

According to iResearch Consulting’s 2021 China’s Third-Party Payment Industry Report, published this June, the number of merchants covered by integrated payment services has reached 30.48 million, up 19.2% YoY, as of the first half of 2021. Serving 6.13 million merchants, Yeahka has a market share of approximately 20%.

A payment method that integrates multiple relatively fragmented payments through the use of an integrated QR code, aggregate payment brings more convenience to both merchants and consumers. For a services provider, in addition to providing omni-channel payment services, leveraging its technical capabilities to provide value-added services is a crucial next step.

This is also the key to Yeahka’s business – the steady and rapid growth of the payment business also propels another important segment for the Company, namely technology-enabled business services. According to Yeahka’s interim report, the revenue of this segment increased 86.6% YoY to RMB360 million, and its contribution to the Company’s gross profit increased to 43.5% from 34.9% in the same period of 2020, significantly higher than other players in the same field.

Yeahka announced on 23 September that, as of 21 September 2021, the trustee of the Restricted Share Unit (RSU) Scheme had utilized an aggregate of approximately HK$119.8 million to purchase 4,104,400 Shares from the market at a consideration of HK$26.30 to HK$30.00 per share to hold in trust for the benefit of the RSU participants pursuant to the rules of the RSU Scheme.

According to the announcement, the shares purchased will be rewards for the RSU participants in the RSU Scheme, as an incentive for their contribution to the Company. In addition, the share purchase pursuant to the RSU Scheme also demonstrates the Company’s confidence in its business outlook and prospect. The Company will continue to conduct share purchases in the market based on market conditions.