Shenzhen this week hosted the 2021 Shenzhen Global Investment Promotion Conference, to attract and focus greater international investment. The Conference highlighted the development directions of Shenzhen’s strategic emerging industries and those of the future as well as key industries and projects in each district, while gathering global investors and quality resources to further develop Shenzhen as a premier choice for global investment. 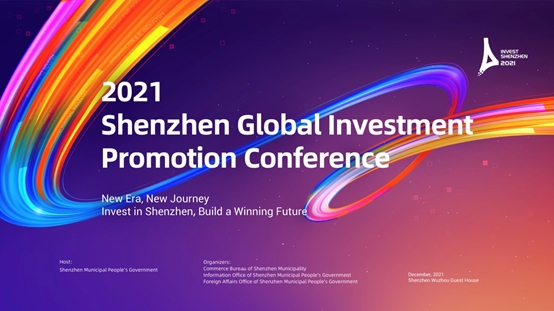 Representatives from the VP level and above from Fortune Global 500 and China’s Top 500 corporations, large SOEs, leading private enterprises, listed companies, and unicorn companies were invited to participate at the Conference. Invitations also went to those in charge of international organizations such as foreign embassies and consulates in China, major business associations and others, all companies and institutions having actively signed up for the Conference. Due to the cross-border travel limits, some senior executives of multinational enterprises, international institutions and representatives of major cities extended video-linked congratulations to Shenzhen and the Conference.

The Conference was organized in the format of a “1+12+N” series of events. In other words, it consisted of 1 main event, 12 district-level investment promotion conferences, and N overseas parallel sessions and industrial investment promotion activities, forming a complete series of investment promotion campaigns. In addition to the main session in Shenzhen, 12 overseas parallel sessions were staged in 12 cities across five continents, including Los Angeles, New York, Toronto and Sao Paulo in the Americas, London, Paris, and Brussels in Europe, Hong Kong and Tokyo in Asia, Sydney and Brisbane in Oceania, as well as Johannesburg, South Africa, promoting the city brand “Invest in Shenzhen, Build a Winning Future” to all parts of the world.

This was the third time that Shenzhen has hosted the Global Investment Promotion Conference since 2019. At the Conference, the International Headquarters Enterprise, Investment Advisor of Shenzhen, and Outstanding Registered Enterprise were awarded, and shared in the “Shenzhen Moments” of investment promotion. A number of major projects were also signed, demonstrating the attractiveness and innovation of Shenzhen as well as the confidence of investors from around the globe in the future development of Shenzhen and its districts.