November 18, the joint venture battery factory by Gotion High-Tech and Vietnam VinGroup was officially opened in Vietnam Ha Tinh Economic Development Zone. The project is expected to achieve an annual production capacity of 5GWh, scheduled to be in operation by the end of 2023, which is the first LFP battery factory in Vietnam. 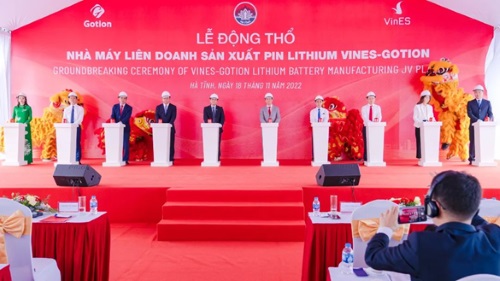 The factory was jointly invested by Gotion High-tech, and VinES (a member of VinGroup). Gotion High-tech holds 51% of the shares and VinES holds 49%. According to the plan, The project has a scale of 14 hectares with a design capacity of 5GWh/year and is expected to be completed and put into operation by the end of 2023. To meet the demand for LFP batteries for VinFast new energy vehicle batteries.

At the Groundbreaking ceremony, Li Zhen, Chairman of Gotion High-Tech, said: VinGroup is the most respectable enterprise in Vietnam. The battery factory jointly built by Gotion High-tech and VinGroup will support the battery needs of VinFast’s electric vehicles. It will not only contribute to the energy revolution, climate-friendly and economic development of Vietnam but also contribute to the energy civilization of human society.

Since the beginning of this year, the globalization strategy of Gotion High-tech has been continuously implemented. In June, the company reached strategic cooperation with JEMSE of Argentina to establish a joint venture production line of battery-grade lithium carbonate in Jujuy Province of Argentina. At the same time, the German Gotion was officially unveiled, which started the pace of “made in Europe” Gotion batteries. In July, the company’s General Depositary Receipts (GDR) rang the bell on the SIX Swiss Exchange; In September, it signed a strategic cooperation agreement with Sumec to promote the export business of energy storage products. According to the company’s plan, by 2025, it is expected to achieve 300GWh annual production capacity of global production capacity, including 100GWh overseas, to help achieve global carbon neutrality.