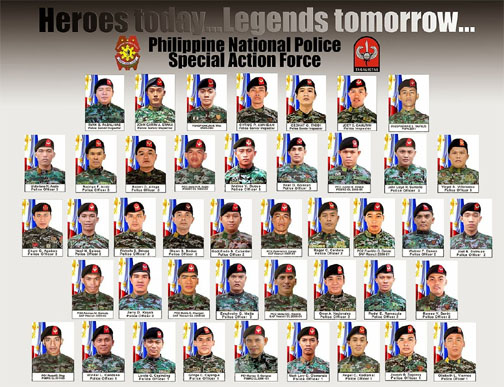 MANILA, PHILIPPINES – A report released by the National Bureau of Investigation (NBI) and the National Posecution Service (NPS) revealed that at least 90 people had been recommended to be charged for their roles in the bloody clash in Mamasapano, Maguindanao, which resulted to the death of 44 elite policemen.

Those who had been recommended to be criminally charged are members of the Moro Islamic Liberation Front, Bangsamoro Islamic Freedom Fighters, and private armed groups, a report by gmanetwork.com said.

Justice Secretary Leila De Lima presented a copy of the 224-page NBI report on the Mamasapano clash on Thursday.

The contents of the extensive report will be publicly disclosed in due time, said De Lima, adding that she still has to go over the findings before publicly revealing it to the public.

“This is a result of a very comprehensive work although the job of the joint team is not over yet,” De Lima said.

The team was given two more months to complete the report on the clash that killed 44 members of the Special Action Force.

On Sunday 25 January 2015, the area around Mamasapano was the site of a sharp clash between Philippines government armed forces and local rebel groups.

In the fighting, 44 members of the Philippine National Police elite Special Action Force (SAF) were killed.

The unexpected clash, and the deaths of 44 SAF police as well as the wounding of 12 others, triggered bitter recriminations amongst leaders at the national level and threatened to derail on-going reconciliation negotiations between the Philippines Government and various rebel groups in Mindanao. – BusinessNewsAsia.com