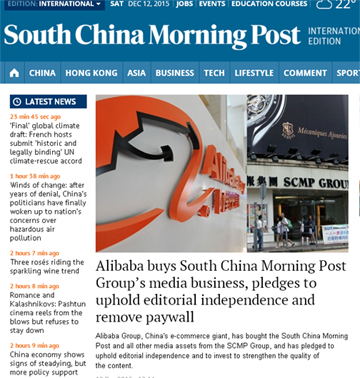 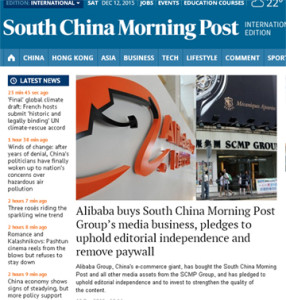 Financial details of the acquisition has not been disclosed and the deal did not come as a surprise to both observers in Hong Kong and mainland China, who have been speculating about the acquisition several weeks ago.

According to Alibaba, it pursued the deal to improve China’s image and offer an alterative to what it considers the biased lens of Western news outlets. Alibaba said the Chinese government had not role in the deal to buy The South China Morning Post.

In an interview, Alibaba’s executive vice chairman, Josep C. Tsai, said Alibaba is rooted in China, and touches so many aspects of the Chinese economy.

“When people don’t really understand China and have the wrong perception of China, they also have a lot of misconceptions about Alibaba,” Tsai was quoted as saying.

In a report published on its website, SCMP has confirmed the acquisition, saying Alibaba has pledged to uphold editorial independence and to invest to strengthen the quality of the content.

Tsai also said the decade-old paywall for all SCMP news sites will come down shortly after the acquisition so that the newspaper can reach out to more readers around the world.

Tsai, who has been dubbed Alibaba’s rainmaker, stressed that the new owner sees maintaining content quality and readers’ trust as the key principles of the newspaper business. – BusinessNewsAsia.com