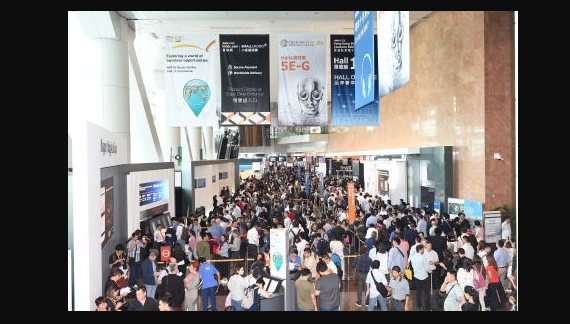 The world’s largest electronics marketplace – the Electronics Fair and electronicAsia – opened in Hong Kong Thursday with about 4,200 exhibitors from 29 countries and regions.

“The exhibits this year include smart tech, virtual reality, wearable electronics and more, demonstrating the industry’s ability to keep abreast of the technology trends and launch products that match the market’s demand. We hope they will be received well during the fairs,” said Benjamin Chau, acting executive director at HKTDC.

Adopting smart and high-tech solutions has become a prevailing trend across virtually all sectors. To effectively showcase the latest technologies and products, the HKTDC has introduced a new Tech Hall at the Convention Hall, clustering five thematic zones including the inaugural Virtual Reality and Startup zones, as well as Smart Tech, Robotics & Unmanned Tech and 3D Printing.

This assemblage will help buyers source high-tech electronic products with ease while investors can explore investment and partnership opportunities in a range of new technologies developed by startups.

Startups are a growing force in driving economic diversity. The new Startup zone gathers close to 50 startup companies from Hong Kong, Canada, the Chinese mainland, Taiwan and the US to showcase new technologies.

A Canadian exhibitor is presenting an in-vehicle diagnostic and monitoring device that can transform a conventional car into a smart vehicle.

Its nine-axis sensor can gather data to reconstruct the car’s motion path if it is involved in an accident. A local startup exhibitor is introducing an electronic smart price tag equipped with a high-definition colour display and Wi-Fi, allowing pricing information to be updated wirelessly in real-time.

Meanwhile, held concurrently with the Electronics Fair, electronicAsia is an important sourcing platform for electronic components and production technologies.

The fair gathers cutting-edge innovations from the US, Germany, France, Singapore, Taiwan, Japan and Korea, providing the industry with new product design ideas and materials.

One of the highlight zones is World of Display Technology, which features products such as a LCD display suitable for outdoor use under direct sunlight. The product features a wide-viewing angle, high-resolution display and can also be used as a touch-screen panel.

The HKTDC has organised more than 140 buyer missions this year representing more than 12,000 global buyers from over 8,000 companies to the two fairs.

These include major international retailers, importers and distributors such as TDL from Canada, Product Group from Australia, Casino from France, Casanova from Spain, Mad Robots from Russia, Mobibox from Brazil, Sound Village from Argentina, LehuMall.com from the Chinese mainland, Croma from India, ICST from Japan, Signeo from Singapore and Matahari Mall.com from Indonesia. – BusinessNewsAsia.com