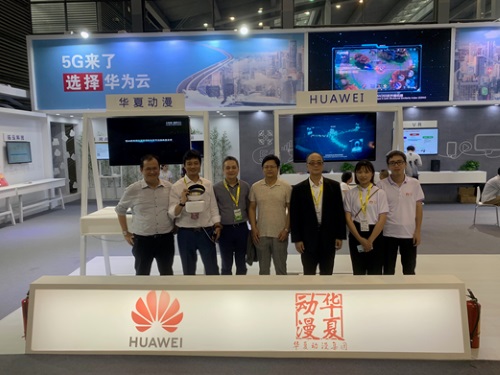 – Sets up VR eSports Development Fund of No Less than HK$100 Million to Explore Huge Business Opportunities of eSports Industry;
– Collaborates with China Aoyuan (3883.HK) and Shenzhen Media Group to Reaches Higher Point in the Cultural and Creative Field

China Animation Characters Company Limited (“China Animation” or “the Group”; stock code: 1566), a leading multimedia animation enterprise in the PRC is pleased to announce that, the “5G+VR eSports . China Animation Exhibition” hosted by the Group 18-22 July (Thu-Mon) during Shenzhen Cartoon and Animation Festival, has attracted more than 300,000 visits. “the Second China Animation Cup – 5G+VR National Electronic Sports Tournament” which was jointly organized by the Group and Shenzhen Media Group (“SZMG”) supported by 5G technology equipped with high resolution, high speed and almost no time delay. The live streaming channels in QQ Live Streaming and Yi Shenzhen has recorded more than 100,000 average daily visitors during the tournament and achieved online and offline interaction among 1 million visitors.

Collaborates with Shenzhen Media Group and China Aoyuan to Establish National Cultural and Creative Base
Besides, the Group and China Aoyuan (3883.HK) have entered into strategic cooperation to collaborate with Shenzhen Media Group to to develop “the Eight Major Projects” in the Shenzhen Yijing National Cartoon and Animation Industry Base, including introducing the cutting-edge industry leaders and a complete industry chain, VR eSports Interactive Experience Center, International Animation Museum, Global Animation Experience Center, World-class Children Amusement Park, Teens Activity Center, Public Technology Service Platform as well as incubators for the companies in the cultural and creative industry.

Achieves 5G+VR O2O Dual Track Strategy
Being the first multimedia animation enterprise in China to list on the Main Board in Hong Kong, the Group demonstrated the soft power of China Animation in the Cartoon and Animation Festival and enhanced the cooperation with the strategic partners. The Group will continue to develop the new industry as the first mover to upgrade the Group’s VR eSports game. The Group will adopt 5G technology in its dual online and offline strategy and implement its IP into VR eSports to leverage the investment values of the IP characters and game attractiveness, and generate synergies with the animation-derived product business.

As for CA SEGA JOYPOLIS, thanks to the two international brand endorsements “China Animation”, and “CA SEGA JOYPOLIS”, which was acquired in 2017, the Group collaborated with property developers in the PRC and government officials to introduce JOYPOLIS and family amusement park Wonder Forest to the developers’ and government officials’ projects focusing the Guangdong-Hong Kong-Macau Bay Area and red tourism cultural area. Currently, the Group operates 3 CA SEGA JOYPOLIS in Shanghai, Qingdao and Tokyo Japan, respectively. And the licensing business of Wonder Forest covers first-tier and second-tier cities in the PRC.

China Animation also owns many famous animation IP, including two top 10 national cartoon characters – “Han Ba Gui” and “Violet,” as well as characters from movies and animated dramas such as “The King of Tibetan Antelope,” “Project Egg,” “Animal Conference on the Environment” and “Amazing UU.” China’s first virtual artist “Violet” created by the Group has held several 3D Holographic Concerts in Shenzhen and Hong Kong since 2015, and will hold her third concert by the end of 2019. The Group also enjoys close cooperative relationships with many world-leading IP brands such as “Transformers” in the US, SEGA Sonic the Hedgehog, Initial D, etc. The Group also participated as the second largest shareholder in the co-investment and co-production of the animated series “The Reflection” with international famous partners such as Studio Deen from Japan, Stan Lee “Father of Marvel” which was broadcasted over 38 countries and regions.