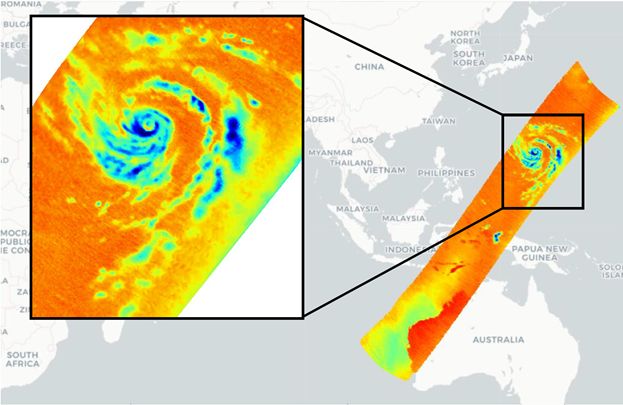 Typhoon Hagibis has strengthened dramatically in recent days, representing the greatest intensification of a Western Pacific storm since Typhoon Yates in 1996. OMS captured this observation of the storm October 8, 2019 at 12:36 a.m. UTC, shortly after the typhoon intensified from a 60-mph tropical storm to a 150-mph super typhoon in 18 hours. The data shows the beginning of the eyewall replacement cycle, a process that occurs with particularly strong storms. During this scan, a core of warmer air – depicted as darker red colors on the right side of the storm – is being drawn into the center of the storm. This warmer air represents a temporary weakening of the storm as a prelude to the development of a new eyewall and further strengthening.

The raw data downlinked from the satellite was processed at OMS’s International Centre for Earth Data (ICED) located in Edinburgh, Scotland.

“Observed data from this satellite can be combined with information from government-owned systems to improve the accuracy of storm forecasts,” said Hurowitz. “We are working with other providers and partners to provide enhanced weather information that improves safety margins for people and businesses facing severe weather events.”

About Orbital Micro Systems
Orbital Micro Systems (OMS) specializes in the development and delivery of technology and data for space applications. With broad expertise in applied science, weather science and earth observation, instrumentation development, data science, space operations, and program delivery, OMS is positioned to deliver innovation to many areas of the aerospace sector. For more information about OMS, please visit https://www.orbitalmicro.com/gems.