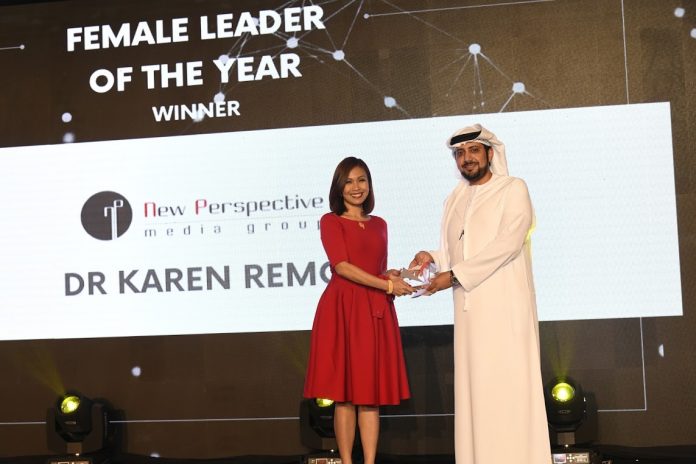 A Filipina CEO based in Dubai has won the ‘Female Leader of the Year Award’ in Middle East Economic Digest (MEED) Awards 2019, one of the most prestigious award-giving bodies for businesses and business leaders in the Middle East.

Dr. Karen Remo, the CEO and Co-Founder of New Perspective Media (NPM) Group, a leading 360-degree media, marketing and communications agency, the publisher of The Filipino Times, the largest Filipino newspaper in the UAE and the biggest digital platform for the Filipino in the whole Middle East, has bagged the distinction at the MEED Awards 2019 held on November 27 at Ritz Carlton-Dubai International Financial Centre in Dubai, UAE.

The award was presented by Sultan Alshaali, Executive Director, Government Accelerators at the UAE Prime Minister’s Office. The ‘Male Leader of the Year,’ was awarded to Colm McLoughlin, executive vice-chairman and CEO of Dubai Duty Free who has been in the business of duty-free retail for 50 years.

With the ‘Female Leader of the Year’ recognition—one of the highest distinctions in the MEED Awards—the Filipina CEO has raised the Philippine flag in the international business landscape, a ground-breaking achievement and accolade for a Filipino national in the GCC.

Dr. Remo was conferred with the accolade due to her “indomitable entrepreneurial spirit that allowed her to launch impressive portfolio as part of the NPM Group”.

The Awards stated: “The judges commended her [Dr. Remo] for her innovative methods that enabled the growth of her business across geographies and culminated in satisfied customers. Additionally, Dr. Karen’s approaches to align with the sustainable development goals as well as the clearly articulated initiatives that have been taken for the Filipino community make her an inspirational leader indeed.”

“It is an honour to receive such a prestigious award and I am very grateful to the committee and the judges for this award. I am very happy to have the privilege to work for and help many clients and brands in the MENA and Asia-Pacific regions. It was their trust and support that gave us this opportunity to shine and the passion and dedication of every team member in the NPM Group of companies to be of service — and to make a difference,” Dr Remo said.

“I am grateful to the UAE for being a cradle for more than 200 nationalities from across the globe including a significant number of Filipinos here who call the UAE their home, and for fostering the spirit of tolerance and entrepreneurship for everyone. Through life-changing initiatives, I am delighted to be instrumental in facilitating meaningful relationships that bind communities and build nations and in doing so, achieve greater good,” Dr Remo added.

A seasoned public relations and marketing strategist, editor, journalist and socio-civic advocate, Dr Remo has been the face and voice of a number of government and corporate institutions.

She co-founded and manages New Perspective Media Group, based in Dubai with six offices in the Middle East and Asia Pacific.

She has successfully connected various investors, partners, and visitors to governments, and has helped more than 1,000 brands reach their target customers through content-driven integrated marketing communications.

She is also the Managing Editor of 999 Magazine; the official publication of the Ministry of Interior which NPM publishes on behalf of the Ministry; and the Publisher of The Filipino Times.

The news website receives 3 million visitors per month registering 20 million impressions and is being read in 236 countries, as per Google analytics.

NPM Group is also the organiser of Philippine Property & Investment Exhibition, now on its 8th edition, is the largest, longest running property and investment expo in the Middle East.

NPM also organises The Filipino Times Awards (now on its 5th year), which honor exemplary professionals in their respective industries and recognises top brands in the UAE.

The MEED Awards recognises successful organisations and accomplished individuals that have helped shape the diversification of the GCC economies. It empowers them to set the benchmark for the best practices and sustainable initiatives in the region.

“The MEED Awards celebrates those who are riding the wave of the current economic landscape by embracing global and regional trends. With regional governments now in the implementation phase of their strategic visions to diversify economies, businesses and leaders boosting the private sector are the key in encouraging economic growth,” says MEED Group Commercial Director, Sonia Kerrigan.

More than 250 nominations have been received for this award-giving body this year, making this edition the most competitive since its inception. – BusinessNewsAsia.com