Canggang Railway Limited (“Canggang Railway”, together with its subsidiaries, the “Group”), which is ranked first among all local freight railway operators in Hebei Province and fourth among all local freight railway operators in China , has announced the details of its proposed listing on the Main Board of The Stock Exchange of Hong Kong Limited (“HKEX”). As the operator of the Canggang Railway Line, the Group principally provides eastbound and westbound rail freight transportation services and other ancillary services, including loading and unloading, road freight transportation, operation, repair and maintenance of Special Service Lines, railway roadbed and other railway facility construction and certain other businesses. 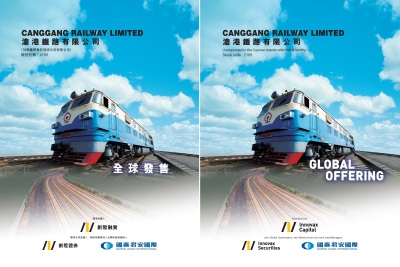 Excellent railway location and growth potential
Prime location provides the Group with a stable business pipeline and growth opportunities. The Group operates the Canggang Railway Line, which begins at Cangzhou and ends in the Bohai New Area, which includes Port Huanghua, and is connected to the Shuo-Huang Railway Line and the Han-Huang Railway Line. Coal transportation accounts for the majority of the Group’s total rail freight transportation cargo. The location of the Canggang Railway Line puts the Group between coal rich areas in western China, particularly Shaanxi Province, Shanxi Province and Inner Mongolia, where a large number of coal mines are located, and coal hungry areas in eastern and southern China.

Alongside the continued growth of the Chinese economy, demand for coal from the eastern and southern markets of China is expected to continue increasing, rising from 1,427.1 million tonnes in 2019 to 1,494.1 million tonnes in 2024. The Chinese government has formulated the “Coal Transportation from West to East” national strategy, emphasizing the importance of transporting coal from the western to the eastern parts of the country. The location of the Canggang Railway Line makes the Group an integral part of a comprehensive railway-port transportation network (together with the Shuo-Huang Railway Line and the Han-Huang Railway Line), linking the coal production regions and consumption areas of China, thereby allowing the Group to benefit from the government policy and providing it with a stable business pipeline relating to the transportation of coal.

According to a Frost & Sullivan Report, Port Huanghua was the largest and second largest port in China in terms of coal shipment volume in 2018 and 2019, respectively. It will be an important port for the “Belt and Road Initiative” and development of the Xiong’an New Area. Furthermore, Port Huanghua ranked eighth and eleventh among all ports in China in terms of average daily throughput of ore in 2018 and 2019 respectively. The cargo throughput of Port Huanghua is expected to increase from 287.7 million tonnes in 2018 to 460.0 million tonnes in 2025, representing a CAGR of 6.9%. Port Huanghua is therefore expected to become even more important to the transportation and distribution of coal in China in the future.

With regard to the Bohai New Area, it is recognized as a national economic and technological development area , a national model base for new industrialization and an experimental base for logistics in China. The region will play an increasingly important role in the national economy, drive demand for rail freight transportation and provide potential customers to the Group.

The Group also provides services to a number of customers in the northern Shandong area, which is the core junction of the Jing-Jin-Ji area and Shandong Province where a number of heavy coal users, chemical manufacturers and petrochemical companies are located.

Furthermore, according to the Three-year Action Plan to Win Battle for a Blue Sky issued by the State Council in July 2018, the only allowed method for transporting coal to key ports, including Port Huanghua, would be by sea or railway by the heating season of 2020. Hence, the rail freight transportation industry is expected to grow, which will provide room for development of the Group’s business.

A high degree of exclusivity and insulation from competition
The Group took part in the construction of roadbeds for the Special Service Lines. Some of these lines run directly to the factories or premises of major local customers from the main railway line. The Group provides efficient transportation services at a low cost through its Special Service Lines and has established strong co-operative relationships with its major customers.

In addition, in northern Shandong area, due to the close proximity of the Group’s stations to the premises/ factories of several of its major customers, it is able to deliver coal from the Shuo-Huang Railway Line to these customers at comparatively competitive prices.

Comprehensive business capabilities covering various aspects of the industry
The Group has developed comprehensive operating capabilities covering the various transportation and logistics needs of its customers, particularly those in coal and ore-related industries. Apart from engaging in its core rail freight transportation business, the Group also provides a range of ancillary logistics and transportation services, allowing it to further diversify its revenue, deepen and strengthen its relationship with customers and leverage existing ties to increase revenue.

Upgrading and increasing transportation efficiency of existing railway
In order to support further growth and meet increasing demand for rail freight transportation services, the Group plans to modernize and upgrade its existing railway and equipment, and thereby improve transportation efficiency. Such a move includes the upgrade of railway tracks of the Canggang Railway Line, renovation of roadbed and building culverts and other necessary infrastructure, purchase of additional locomotive, and purchase of equipment to upgrade communication, signal automation and remote monitoring systems. All are set to raise the Group’s overall operational efficiency and overall transportation capacity of the Canggang Railway Line.

Use of Net Proceeds
Assuming that the Over-allotment Option is not exercised and the Offer Price is set at HK$0.975 per share, being the mid-point of the indicative price range between HK$0.85 and HK$1.10, the Group estimates the net proceeds from the Global Offering, after deducting related underwriting fees and estimated expenses in connection with the Global Offering, will be approximately HK$199.0 million. The Group intends to use the net proceeds for the following purposes: