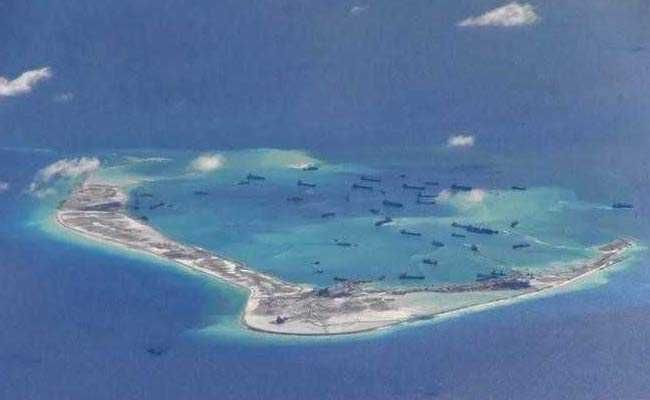 MANILA – Seas have acquired unparalleled importance in modern times owing to their trade routes and rich resource base. The territorial claims of sovereignty over the various unclaimed and disputed regions are thus on the rise fueling further conflict, friction and chances of the potential outbreak of violence. The South China Sea and its island chains are experiencing rising escalation and tension first-hand. The situation as it is in the South China Sea is very alarming owing to the power imbalance in the region. This shifted axis of power is concerning for the smaller states in South East Asia and a major threat to their territorial sovereignty.

China’s claim to the island chains is not new and has been there for a few decades now. The history of the claim can be traced to a map published at the request of the Kuomintang Govt. based on the maps drawn by some private firms and cartographic books, the Map of the South Sea Islands, issued in 1947. The 9-Dash Line used by China to claim their historical right was drawn as a part of this map to illustrate the territorial extent of China. The Chinese claim at that time was though limited to small scattered islands in the South China Sea. The position of the Kuomintang Govt. on territorial extent was adopted by the mainland Govt. in China, and not having any background information on this, it maintained the islands within the 9-Dash Line: Nansha (Spratly), Sheesha (Paracel) and Zhongsha (an imaginary island group which has no physical existence and is actually a misinterpretation of Macclesfield Bank, a submerged feature in the South China Sea). China has never been able to justify the claim to these island groups primarily as they have never exercised sovereignty over them over an extended period of time and also due to the existence of non-factual and imaginary claims over fictitious islands.

UNCLOS (United Nations Convention on the Law of the Sea) has clearly defined laws to define coastal and maritime boundaries, and per its laws, a 200 Nautical Mile Sea Floor as a part of the Continental Shelf of a State, with exclusive rights reserved for all individual states. Things began to get serious in 2009 when all of the countries in South East Asia implemented UNCLOS and aligned their respective claims and jurisdictions in accordance with international law. China reacted badly to UNCLOS as they knew if UNCLOS was implemented their Claim to the international China Sea would be defunct, and thereby China began the program to strengthen its presence and activity in the South China Sea, leading to more friction between China and smaller states. The situation worsened when China began to interfere in the special economic zones of smaller states and escalations were reported closer to the coasts of smaller states. The incident at Scarborough Shoal, a standoff between the Philippines and China, is one of the recent examples of the rising escalations and conflicts, and Chinese attempts to exercise jurisdictional rights as per the 9-Dash Line.

Growing Chinese interest in the sea trade routes has created friction points. China’s interest in the Arctic is a major concern for many. Global warming has opened up the Arctic and is allowing ships to pass which means it is opening up new trade routes from East to West and vice versa. If the Arctic trade routes open, the South China Sea, which is the doorway for China to the Indian Ocean, Africa and Europe would have an alternative Maritime trade route via the Arctic. This has fascinated China, and China is concerning and aligning itself with the geopolitical and scientific developments related to the Arctic. However, the countries surrounding the Arctic are worried about the Chinese Navy and military build-up in the Arctic, as happened in Djibouti-Africa. China will have a tough time convincing the states surrounding the Arctic about building ports even when the countries are divided over the opinion to allow China access to the Arctic. Russia and the United States are among the states who favour opening up the Arctic for naval and maritime trade activities, while states like Canada are concerned and against it as large parts of the Arctic are considered to be Canadian territory by Canada. The US is also concerned about Chinese dual use of technology for trade and military and this has made it difficult for China to establish ports with many countries in that area. Chinese Arctic policy can lead to the emergence of fresh flashpoints in the Arctic, given the divided opinion on access to the Arctic to China.

The growing conflict and escalation over marine water bodies make it imperative for the implementation of UNCLOS, especially in the South China Sea. The claim to the Island chains and subsequent friction between states can be reduced by not including the islands as an extension of the continental shelf of countries and thus the claim would not result in overlapping of maritime boundaries of states thus reducing the chances of a possible outbreak of violence by eliminating the zones wherein more than one state could exercise their exclusive rights. UN must involve itself and enforce the implementation of UNCLOS as abiding by International Law and give peace a sustainable chance to flourish.

* The Author: Professor Jay L. Batongbacal is Director, Institute for Maritime Affairs and Law of the Sea (IMLOS) at the University of the Philippines (UP). IMLOS serves as the country’s national centre for independent research and policy studies on maritime matters of interest to the nation and collaborates with a wide network of government groups, non-government organizations, academic institutions, and private entities within and across our country borders, covering the law of the sea, maritime affairs, and even territorial issues.

Professor Batongbacal was a member of the technical team that prepared and defended the Philippines’ claim to a continental shelf beyond 200 nautical miles in the Benham Rise Region, made in a Submission filed with the Commission on the Limits of the Continental Shelf (CLCS) pursuant to the provisions of Article 76 of the Law of the Sea Convention. The CLCS recognized Philippine jurisdiction over the Benham Rise Region in April 2012.

Batongbacal obtained his LL.B. (1991) from UP College of Law, and Masters in Marine Management (1997) and Doctorate in the Science of Law (2010) from Dalhousie University in Canada, acquired under scholarship grants from the Canadian International Development Agency and the prestigious Pierre Elliot Trudeau Foundation, respectively.