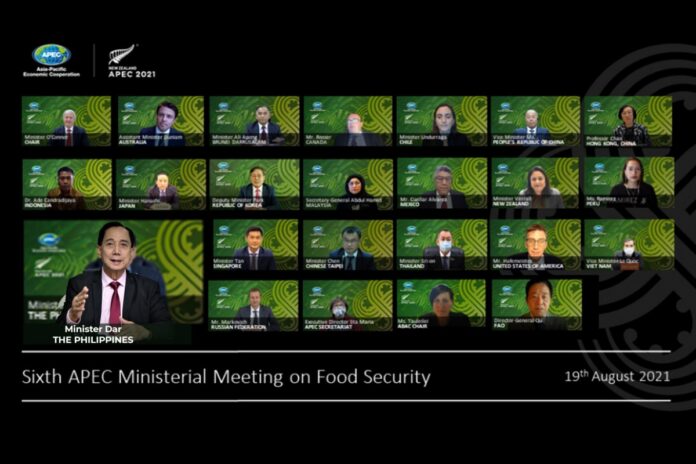 The Philippines has committed to advancing digitalization and innovation, productivity, inclusivity, and sustainability to achieve food security in responding to the immediate global health crisis and economic shock brought about by the COVID-19 pandemic.

Agriculture Secretary William Dar signed the commitment — on behalf of the Philippine government and President Rodrigo Roa Duterte — during the virtual 2021 APEC Food Security Ministerial Meeting, on August 19, 2021, along with 20 other members of the Asia Pacific Economic Cooperation (APEC).

During his privilege speech, Secretary Dar said the DA is keeping a close watch on trends and technological developments in the global food production ecosystem, as it strives to bring agriculture advocacy and education to the next generation.

He particularly pointed to the country’s growing base of youthful agripreneurs, who are using social media as their most cost-effective marketing tool. “In that, swift catching up has been done the past couple of years. The young population of the Philippines is not about to miss out on lending their savvy for technology to one of the most vaunted sectors inducting economic recovery,” he said.

“This young, skilled cohort is being empowered by access to credit, further education and training in agri-fishery, and ready markets through our banner marketing programs. This new generation of agripreneurs are the vectors of digital culture,” he added.

The APEC ministers also issued an annex to their statement, a 10-year Food Security Roadmap that details goals and key action areas where the 21-member assembly is well-placed to help ensure that its peoples always have access to sufficient, safe, affordable, and nutritious food to meet their dietary needs and food preferences for an active and healthy life.

The APEC Food Security Roadmap Towards 2030 also promotes the inclusion of micro, small and medium enterprises (MSMEs), women, youth, Indigenous communities, and the elderly in the sector, as integral to maximizing resources, improving rural, remote, and coastal livelihoods, and unlocking the full potential of the APEC region.

“As we look to rebuild from the pandemic, we must adapt to change in a way that supports our MSMEs, such as small-scale producers in the food, agriculture, and fisheries sectors. We are determined to leave no one behind,” the APEC ministers said in their statement.

The APEC agriculture and food ministers also highlighted the upcoming United Nations Food Systems Summit (UNFSS) in New York, USA, in September 2021, and efforts towards achieving the UN sustainable development goals (SDGs). “We recognize that there is no ‘one size fits all’ pathway to these goals. We highlight APEC’s complementary efforts to support more productive, sustainable, and inclusive food systems, they said.

For his part, Secretary Dar said that regional cooperation will offer valuable lessons to developing countries, such as the Philippines, to keep up with the times and future challenges in food systems and food production.

During the virtual meeting, the APEC food ministers also encouraged private sector’s involvement in implementing the Food Security Roadmap Towards 2030.

“The private sector is fundamental to helping us achieve food security and realizing the APEC Putrajaya Vision 2040, with its three economic drivers: trade and investment; innovation and digitalization; and strong, balanced, secure, sustainable, and inclusive growth,” the ministers said in their joint statement.

Launched in November 2020, APEC Putrajaya Vision 2040 is a pledge made by the senior ministers that the world’s most dynamic regional economies will cooperate toward building an open, dynamic, resilient, and peaceful Asia-Pacific, and that member-countries will continue to work together to deliver a free, open, fair, non-discriminatory, transparent, and predictable trade and investment environment.