Here are the top business stories around the world for April 2, 2015. 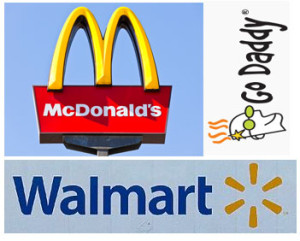 Fastfood giant McDonald’s and US retailer Walmart have voluntarily agreed to increase low-wage workers at its stores in the US, joining other major US companies to raise wages as the country’s economy has picked up. McDonald’s also said it will add benefits for its more than 90,000 workers.

Internet registrar GoDaddy Inc made a splash on Wednesday as its shares soared 31 percent on the first day of trading on the New York Stock Exchange. GoDaddy’s stock closed at USD26.15. The company priced 23 million shares in its initial public offering at USD20 a piece after the market closed on Tuesday.

Jobless claims in the United States fell by 20,000 to 268,000 in the week ended March 29, the lowest in nine weeks, adding to signs that the American economy is picking up. The US Labor Department said fewer Americans filed applications for unemployment benefits in nine weeks.

Microsoft to Give Away USD16.1m in Free Services to Chinese Startups

US-based Microsoft Corp is giving away Rmb100m (USD16.1m) in free cloud services and software equipment to 100 Chinese startup companies to boost its public cloud business. In a statement released on 1 April, Microsoft said that it will sign up 100 startups in mainland China in six months’ time. These firms will receive the Microsoft Windows Azure cloud service, software and development equipment. Microsoft’s partners Gobi and DCM could also give away venture-capital investments.

A recent report released by Standard & Poor’s Ratings Services showed that the global insurance industry’s earnings will be challenged by uneven economic conditions from region to region. The report, entitled “Pursuing Global Insurance Profitability Amid Tempered Economic Growth”, said varying economic conditions in many parts of the world will remain the foremost obstacle that insurers will have to confront when it comes to finding earnings growth this year. Profitability in 2015 will be even more difficult for insurers due to the extraordinarily low interest rates around the world, especially in the eurozone. – BusinessNewsAsia.com