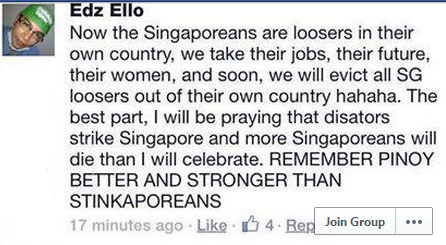 SINGAPORE – A Filipino nurse working in Singapore faces three years imprisonment or a fine of SGD5,000, or both, if found guilty of sedition charge filed by the Singaporean authorities.

Ello Ed Mundsel Bello, 28, was arrested after he posted a seditious statement on his Facebook account that authorities said promote feelings of ill-will and hostility between Filipinos and Singaporeans.

“Now the Singaporeans are loosers in their own country, we take their jobs, their future, their women, and soon, we will evict all SG loosers out of their own country hahaha. The best part, I will be praying that disators strike Singapore and more Singaporeans will die than I will celebrate. REMEMBER PINOY BETTER AND STRONGER THAN STINKAPOREANS,” Bello said in his Facebook account.

Bello told the Singaporean police that he did not post the comments online that someone had accessed by someone else without his permission.

Authorities, however, did not buy Bello’s claims. The Singaporean police said Bello lied to authorities three times and will be charge of providing false information to a public servant.

Bello was arrested and his bail was set at SGD10,000. His passport was also seized by Singaporean authorities.

A pre-trial conference for the case of Bello is set for April 12.

Bello was fired by Tan Tock Seng Hospital in January. The hospital said his comments had distressed members of the public and hospital staff.

“The comments were highly irresponsible and offensive to Singapore and religion,” a hospital spokesman said.

A Facebook page petitioning Ello to apologize and be deported out of Singapore has been put up. –  BusinessNewsAsia.com