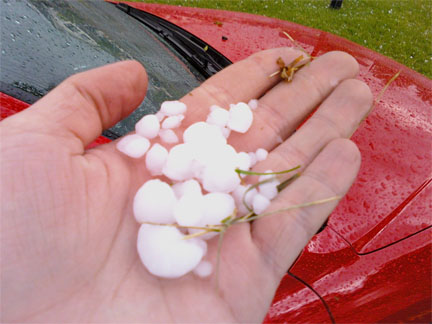 MANILA, PHILIPPINES – In the middle of a hot Tuesday afternoon, a sudden downpour caused by a thunderstorm surprised residents in Metro Manila while other areas experienced hailstorms as the rest of the country works hard to contain the effects of the dry spell caused by mild El Niño.

The downpour that lasted for less than two hours immediately triggered flooding in some parts of the metropolis.

The heavy rains followed days of sizzling temperatures and Pagasa said warmer days were expected with the end of the northeast monsoon and the shift of wind direction from northeasterly to easterly.

“With this development, associated weather conditions include increasing number of warm days and generally good weather in most areas of the Philippines partly due to the dominance of the ridge of High Pressure Area and the easterlies,” Pagasa said.

While the sudden downpour surprised Metro Manila residents, people in nearby areas were even more surprised to see tidbits of snow falling from the sky.

The hailstorm was reported in some parts of Quezon City, with residents taking photos and videos of snow as a big as marbles.

Like other precipitation in cumulonimbus clouds hail begins as water droplets. As the droplets rise and the temperature goes below freezing, they become supercooled water and will freeze on contact with condensation nuclei. – BusinessNewsAsia.com