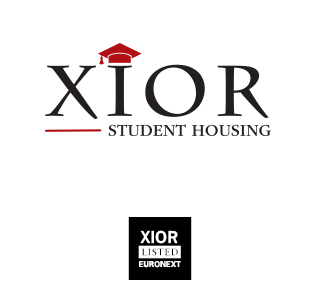 With an issue price set at € 25, the Belgian real estate company raised € 88 million in new capital, reaching a total market capitalisation of € 116 million. The offer was 2.1x oversubscribed, with a strong demand from both Belgian retail investors and institutional investors in Belgium, Continental Europe and the United Kingdom.

Xior Student Housing NV is a Belgian property company specialising in student housing which offers a variety of accommodation, ranging from rooms with communal facilities to en-suite rooms and fully-equipped studios.

Xior Student Housing is accredited as a public regulated real estate company (RREC) under Belgian law and has a property portfolio worth approximately € 196 million. With an average occupancy rate of 98%, Xior’s portfolio comprises over 2,000 rooms situated in major student cities in Belgium (Leuven, Ghent and Antwerp) and in the Netherlands (The Hague, Maastricht, Breda and Tilburg).

“After the successful closing of the offer, today’s listing marks a further major milestone in Xior’s development,” declared Christian Teunissen, CEO of Xior Student Housing. “I am very pleased with the results of the IPO. It indicates strong confidence in and support for our future plans and strategy. The management team would like to thank both private and institutional investors for subscribing for the offer.”

Alain Baetens, Head of Listings of Euronext Brussels, added: “We are delighted to support Xior Student Housing in this new phase of its development. We are particularly happy that the potential of the company has been recognized by the institutional and retail investors, given the largely oversubscribed transaction.

“We see this transaction as a testimony to the resilience of our real estate franchise across our Euronext markets, totalling 107 companies in the sector. The transaction will close the 2015 IPO year at Euronext Brussels with over € 400 million raised through IPO’s within Enternext in Belgium, the highest level reached since the financial crisis in 2008,” Baetens added.

To mark the listing, Frederik Snauwaert, CFO of Xior Student Housing, rang the bell in Brussels to open trading. – BusinessNewsAsia.com