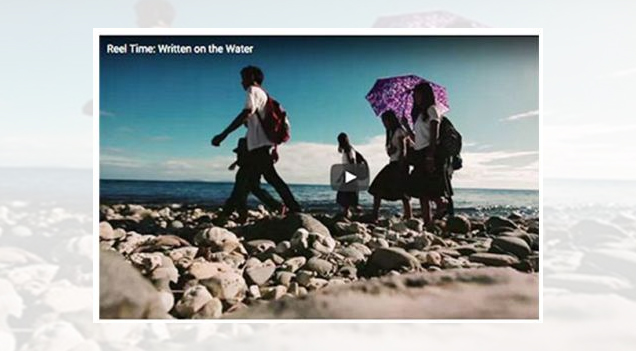 A documentary on dangerous and treacherous journeys students have to take to get to school in a far flung are in the Philippines is this year’s winner of the Asia-Pacific Child Rights Awards for Television.

The documentary, ‘Reel Time: Written on the Water’, produced and broadcast by GMA Network, highlights the dangerous trip to school for students who must wade through the sea and climb a mountain to go to school.

‘Reel Time: Written on the Water’ was praised by the jurors. “The show reflects the problems the children face,” they said. “It not only shows their difficult journey but also how this journey affects the educational development of the children.”

Every day, before sunrise, children in Matnog, Sorsogon, prepare for a hard trip to school. The fastest route requires them to walk across the sea while the tide is low and trek up a mountain.

After the two-hour walk, despite exhaustion and hunger, they try their best to absorb their lessons. Sadly, after risking their lives on the way to school, the children are met with a shortage of classrooms and textbooks. Despite the odds, however, their determination to learn never wanes.

“Weeks after its initial broadcast, some groups organized a fund drive and outreach project to send bags, books and other school supplies,” the team said. “Yellow Boat of Hope, through its donors, was able to build motorboats so that children can commute to school. The voters also selected new local leaders who they hope could really bring change and fulfill their promises of uplifting the kind of life they have right now.”

“The story relates to the modern-day realities in the lives of children not only in Asia but also in other parts of the world,” Dr Javad Mottaghi, ABU Secretary-General, said. “They are prepared and ready to overcome all obstacles to gain access to a much desired education – their key to success in the future. They are absolutely right.

“‘Written on the Water’ sends a clear message to the children’s parents, teachers, social groups, and other local and international organisations. This message is that sacrifice, determination and hard work starts at a very young age due to socio-economic conditions which the children are not responsible for. It’s our moral duty to help them by any means and pray for their future.”

“CASBAA congratulates GMA Network for their unflinching look at childhood poverty in ‘Reel Time: Written on the Water’,” said Christopher Slaughter, CEO of CASBAA. “Our industry reaches hundreds of millions of people around the world daily. It is heartening to see our medium being leveraged as a platform not just for entertainment, but in the service of such a worthy cause as alleviating the plight of children in need. On behalf of the industry, CASBAA salutes the on-going participation of broadcasters from across the Asia Pacific region in this year’s Award process.”

For the first time, UNICEF will also award a special UNICEF Regional Director’s Award for TV to ‘101 East’s ‘Too Young to Wed’, produced by Al Jazeera. The award will be presented at the High Level Meeting on South-South Cooperation for Child Rights in Asia and the Pacific in Kuala Lumpur, Malaysia in November.

“‘Too Young to Wed’ highlights the important issue of child marriage throughout the region. This issue is an important one for UNICEF; it’s about young girls losing their childhood,” said Karin Hulshof, the UNICEF Regional Director for East Asia and the Pacific. “Young Beezly’s heartbreaking story is still all too common – and not only in Bangladesh. Child marriage is a fundamental violation of human rights and programming like this can support UNICEF’s efforts to put an end child marriage once and for all. I commend 101 East for drawing attention to this important issue.” – BusinessNewsAsia.com