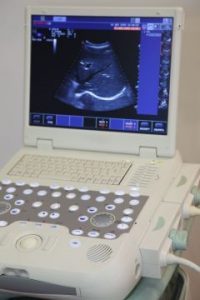 Researchers analyzed the effects of ultrasound exposure on baby rabbits and found the rabbits had lower bone density, raising questions about the common use of ultrasounds on pregnant women worldwide. (Copyright: 123rf/Pavel Losevsky)

Selangor, Malaysia — Young rabbits exposed to ultrasound during fetal development had weaker thighbones than unexposed rabbits, according to a study published in the Pertanika Journal of Science & Technology. While the finding applies to a relatively small group of test subjects, 142 young rabbits, it raises questions about the rising use of prenatal ultrasounds in women worldwide.

Ultrasounds use high-frequency sound waves to produce images of internal body structures, including developing fetuses. The ultrasound image is produced by the reflection of sound waves bouncing off the structures they hit. Ultrasound imaging has been used for over 20 years and is considered relatively safe.

However, the U.S. Food and Drug Administration cautions against using ultrasound for non-essential purposes. The concern is that ultrasound waves carry energy that heats tissues and can sometimes produces small gas bubbles in body fluids or tissues. The long-term effects are unknown.

With the use of neonatal ultrasounds increasingly popular and commonplace – many women have multiple ultrasounds throughout their pregnancy – a team from Universiti Teknologi MARA in Malaysia wanted to study potential side effects.

They studied 22 pregnant rabbits, who gave birth to 142 young. Four mother rabbits received no ultrasounds, while the others were exposed to ultrasound for 30 minutes, 60 minutes or 90 minutes once during pregnancy. Each rabbit received only one ultrasound, but the timing was varied throughout the three trimesters of pregnancy to see if there were different effects. The researchers analysed the baby bunnies’ thighbones at once and five months.

Overall, bunnies exposed to ultrasound in the womb had significantly weaker bones than those not exposed. Bones can absorb far more energy than other tissues, which is why ultrasounds can have a disproportionate effect on them.

There were some variations between exposure amount and timing. In the first trimester of pregnancy, the bones have not yet ossified, so they were better able to handle the ultrasound heat. But by the second and third trimesters, the bones are thicker, and so there is a greater impact. The bunnies’ bodies were unable to repair the damage and their bones had greater porosity and lower density than control subjects.

The researchers note that many times medical professionals encourage ultrasounds to boost business, and pregnant women enjoy getting the images. However, since rabbit bones are similar to human bones, this and other studies suggest it would be safer to restrict ultrasounds to high-risk pregnancies and other necessary situations, the researchers conclude.