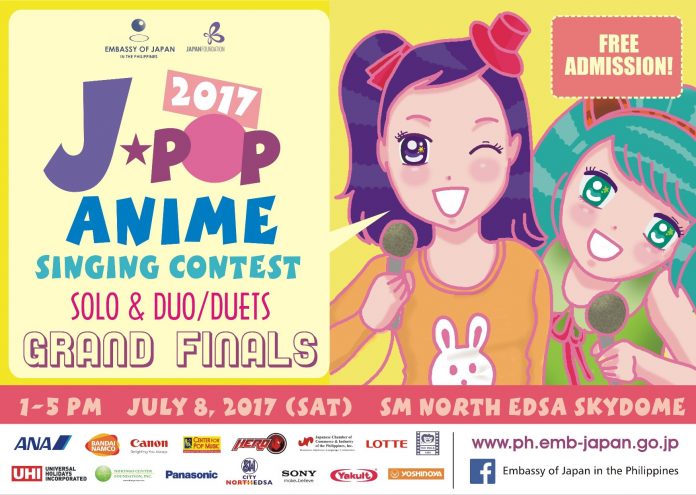 In celebration of the Philippines-Japan Friendship Month this July, the Embassy of Japan, in cooperation with The Japan Foundation, Manila is inviting Filipino amateur singers to join the 2017 J-pop Anime Singing Contest.

Interested applicants may join as a solo singer or as a duo/duet and cover any Japanese song originally performed by a Japanese artist.

To join, applicants should send a filled-out application form, a photo, a print-out of the song lyrics with the name of the original performing artist/s, a short write-up about the participant/s (50-100 words) and the link to an uploaded video performance of one or two songs combined not exceeding three minutes on Youtube.

All entries must be submitted to the Japan Information and Culture Center (JICC) Library, Embassy of Japan, 2627 Roxas Boulevard, Pasay City 1300 on or before the extended deadline of Friday, June 16, 2017.

Ten finalists will be carefully selected to compete in the Grand Finals to be held on Saturday, July 8, 2017 from 1 to 5 pm at the SM North EDSA Skydome, Quezon City. The event is free and open to the public.

Exciting prizes await the winners, including an all-expense-paid trip to Japan courtesy of All Nippon Airways and Universal Holidays, Inc.