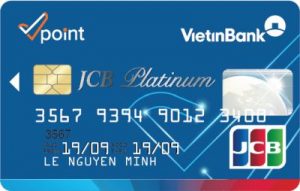 The Vpoint Card is the first point card in the market which allows millions of consumers to earn points by spending at any merchant in the Vpoint network. As a result of the comprehensive co-operation among VNPT, Vietinbank and JCB, Vpoint Card can also be used at JCB’s nation-wide merchant network in Vietnam as well as JCB’s international merchant network with around 30 million locations globally.

The card works not only as an international credit card but also as a Vpoint membership card at the same time. All the cardmembers can enjoy JCB privileges such as JCB Plaza & JCB Plaza Lounge, staffed service counters for JCB cardmembers located around the world. In addition, promotions and discounts of up to 50% will be offered at famous & popular Vpoint merchants like restaurants, taxis, spas, supermarkets and travel agencies.

Furthermore, for each purchase with the card, a certain number of Vpoints would be earned which then could be redeemed for many attractive gifts. Currently, the Vpoint community is a fast growing network with more than 2,000 selective & popular merchants such as Kichi Kichi, Saigon Tourist, VinaSun, VnTrip and Bibomart.

Mr. Pham Anh Tuan, Deputy General Director of VNPT Vinaphone, commented “On behalf of VNPT, I am very pleased to announce that we are issuing Vpoint Card. This partnership among VNPT, Vietinbank and JCB will strengthen the ties between our business and the two countries of Vietnam & Japan. Our customers can enjoy all the various attractive benefits developed by not only VNPT but also Vietinbank and JCB.”

Mr. Kimihisa Imada, President & COO of JCB International, said, “I am delighted to establish a close partnership with VNPT as one of the largest telecommunication groups in Vietnam with nearly 40 million customers. JCB cards have been issued in Vietnam since 2011, and we have a strong commitment to the development of the Vietnam cashless payment market, and offer a unique payment experience to our customers. We are convinced that this first endeavor co-brand card will be popular in Vietnam as it is in Japan. I am confident that the Vpoint Card would be successful as it directly inherits VNPT’s huge potential customer database, in additional to our diversified privileges as well as outstanding banking services by Vietinbank.”