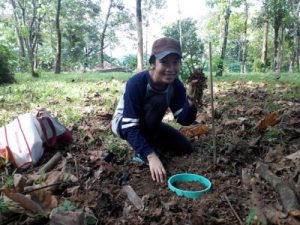 Selangor, Malaysia – (ACN Newswire) – Older rubber tree and oil palm tree plantations in tropical Malaysia release more carbon dioxide from the soil into the atmosphere than younger groves, according to new research in the Pertanika Journal of Tropical Agricultural Science.

Forests and plants store carbon dioxide to produce energy. However, when plants drop their leaves or die, soil microbes go to work to decompose the organic material, and much of the carbon is released back into the atmosphere. This is a natural part of the global carbon cycle. The carbon dioxide released from the soil is called soil CO2 efflux.

The factors that affect this efflux process are not well understood. Learning more can help improve forecasting models that predict how soils respond to continuous rises in manmade carbon emissions, affecting the carbon cycle and climate.

Researchers from Universiti Putra Malaysia investigated how the age and species of trees affect soil CO2 efflux. The team focused their studies on four stands of rubber and oil palm trees that were planted near the university campus 22 six years ago. Using an infrared gas sensor, which precisely measures how much CO2 is in the air right above the soil, they took multiple measurements from each stand, twice a month for three months (April, May and June). They also took hourly measurements between 9 a.m. and 5 p.m. to see how efflux changed throughout the day.

They found that the soil in both the older rubber and oil palm tree plantations released almost twice as much carbon dioxide compared to the soil in each of their younger plantations. The researchers suggest this is likely due to the greater amount of leaf litter and dead organic material being decomposed in the more mature stands. Soil in the rubber tree plantations also released much more carbon dioxide than the oil palm plantations; likely because rubber trees, being deciduous, drop their leaves annually, unlike palm trees.

The team also measured soil temperature and relative humidity, which influence soil CO2 efflux. Relative humidity appeared to have a greater impact than temperature, as the temperature in the tropics is relatively stable throughout the year. However, the team could not draw any strong conclusions about the relationship because it varied widely over space and time. A longer investigation is required to understand what other factors might influence this complex relationship.

The researchers stress that the release of more CO2 from the older stands via decomposing matter does not mean that, in general, older trees should be automatically cut down and replaced with younger ones. The older trees in this study might be removed once they have reached the end of their productive years and the grove replanted, but as part of overall plantation management. Rather, the insight gained here adds to the understanding of how efflux changes from young to old forests, and between species with very different physical characteristics, which can help refine carbon cycle estimates.

The paper is available from this link: https://bit.ly/2xFU3Qt

Images
Cindy Usun Sigau removed leaves, branches and grass, collectively known as litterfall, from approximately 1 meter around and within the soil collar before the start of the experiment. This was to ensure the researchers only measured carbon released from the soil in the soil collar space – not the carbon released from the other plant matter. (Credit: Cindy Usun Sigau) https://bit.ly/2QWZBxR

To measure how much carbon dioxide was released from the soil in the rubber plantations and oil palm plantations near the Universiti Putra Malaysia campus, the researchers used a portable LI-8100A Automated Soil CO2 Flux System (Li-Cor Inc., Lincoln, NE) with a 20-cm-sized chamber connected to an infrared gas analyser. (Credit: Cindy Usun Sigau) https://bit.ly/2N0KC34