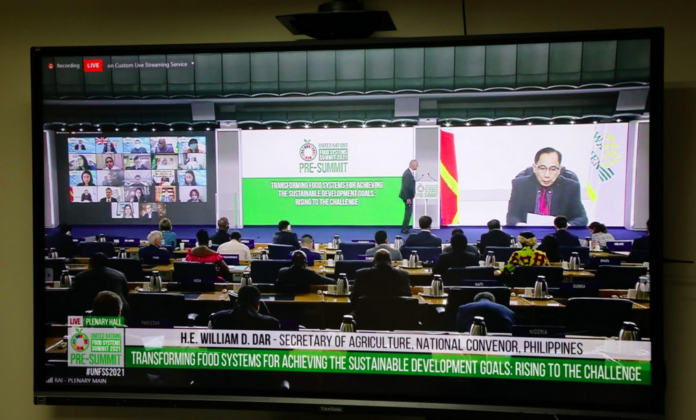 “The Duterte administration has been employing a ‘whole-of-nation’ approach to attain food security, which are in sync with the five action tracks of the UNFSS toward food systems transformation,” said Secretary Dar, at the ministerial roundtable session on transforming food systems for achieving UN sustainable development goals (SDGs), on July 27, the second day of the Rome pre-summit.

Delving on the topic, “Achieving Zero Hunger: Nutritiously and Sustainably,” secretary Dar was invited by UN Secretary General Antonio Guterres, as one of the speakers at the Rome pre-summit, where the DA chief was joined by 24 agriculture ministers from other member-countries of the UN Food and Agriculture Organization (FAO).

Secretary Dar said the government must be at the helm of the transformation process as it has the resources to provide the enabling environment, and it should adequately utilize funds to improve food systems — aimed not only to produce more quality, nutritious and affordable food, but also to create more jobs, increase incomes of farmers and fishers, and sustain the environment.

He said science, technology, and innovation are essential to fast-track the transformation of national agri-food systems, and practical research for development should be sustained.

Further, he said “the youth must be increasingly involved, capacitated, and supported to contribute to national food systems transformation for the needs of today and the future,” the DA chief added.

“However, with the inter-connectedness of food markets and trade, no one country can fully transform its food systems to meet the UN SDGs by 2030,” said secretary Dar, adding that transforming national food systems require regional and global cooperation.

“The Philippines, therefore, looks forward to building coherent coalitions with fellow UN member-countries to transform our respective food systems. Together, we can drive transformative change to build a world, where healthy, sustainable, technology-based and inclusive food systems allow both people and our planet to thrive,” he said.

The Rome pre-summit was conducted in a hybrid format, where dozens of ministers and delegates attended physically, complemented by a virtual platform, engaging thousands of other participants from around the world.

Every UN FAO member-state also had the opportunity to provide statements on their respective national food systems transformation.

As the UNFSS national convenor for the Philippines, secretary Dar shared the results of the DA-led National Food Systems Summit Dialogue, held July 13-14, 2021, in Quezon City.

The July 27 ministerial session in Rome was moderated by Dr. David Nabarro, senior advisor to the UNFSS dialogues, and special adviser of UN chief Guterres on 2030 agenda on sustainable development and climate change.

The Rome pre-summit is a prelude to the UNFSS in New York, USA, in September this year. (DA StratComms)