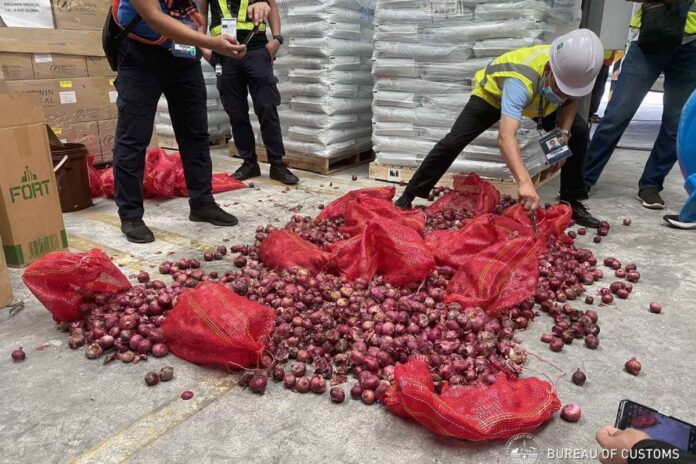 The Bureau of Customs (BOC) – Port of Subic, through its Customs Intelligence and Investigation Service (CIIS) Field Station and the Enforcement and Security Service (ESS) Subic District Command, earlier this month seized 23 forty-footer containers of red onions from China.

The containers, estimated at P86.250 million in commercial value was consigned to a certain Duar Te Mira, arrived in two batches and were all misdeclared as “chapatti bread” in their manifests.

The alert was ordered to verify a derogatory information received by CIIS on the shipment. Subsequent physical examination of the containers revealed red onions instead of chapatti bread with estimated value of P41.250 million.

Customs profiled and alerted the arrival of the second batch of said containers. Like the previously seized batch, the 12 forty-footer containers which arrived on July 13 on board MV SITC Port Klang from China were all declared to contain chapatti bread.

CIIS Field Station once again requested for the immediate issuance of Pre-Lodgement Control Order (PLCO), which Collector Martin approved and disseminated to all offices concerned.

Part of the rigid examination was to tear down walls and ceilings of the container for possible drug concealment. The examination yielded negative presence of drugs. The estimated value for this batch was at P45 million. (BOC)