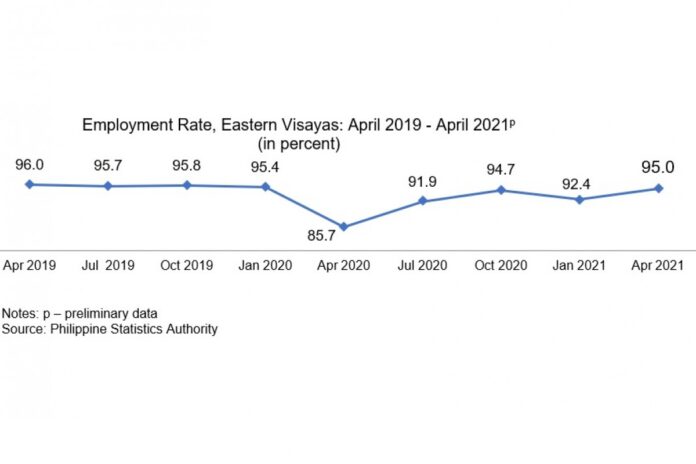 This means that around 6 in 10 of the population aged 15 years and over were either employed, underemployed or unemployed during the period. The 2 million persons in the labor force in April 2021 was higher by 226 thousand as compared with the figure during the Enhanced Community Quarantine (ECQ) period in April 2020 recorded at approximately 1.8 million.

This was also higher than the figure reported during pre-pandemic time in April 2019 and in January 2021 posted at 1.9 million persons in both periods. Among regions, Eastern Visayas ranked 6th lowest in terms of LFPR.

The total number of employed persons in Eastern Visayas as of April 2021 was estimated at 1.9 million. This translates to an Employment Rate (ER) of 95% percent which is 2.6 percentage points higher than the 92.4% employment rate reported in January 2021.

This number represents 15.5% of the total employed persons, 6.3 and 5.7 percentage points lower than the 21.8% and 21.2% underemployment rate recorded in April 2020 and January 2021, respectively. Eastern Visayas and NCR which both posted 15.5% underemployment rate ranked 6th lowest among regions. (PSA-RSSO VIII)