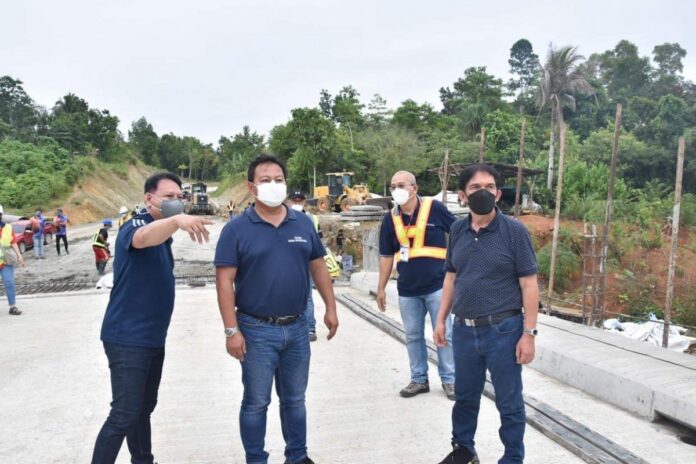 Groundwork of the Department of Public Works and Highways (DPWH) for an improved new road network in Zamboanga Peninsula continues to advance despite the pandemic.

According to Undersecretary Emil K. Sadain, in-charge of DPWH UPMO Operations, civil works for three (3) core sub-projects located in the provinces of Zamboanga Sibugay and Zamboanga del Norte, are in advance stages of completion.

The 15-kilometer Tampilisan-Sandayong Road in Zambonga Del Norte, one (1) of the core sub-projects inspected by Undersecretary Sadain and Project Director Sharif Madsmo Hasim, has an accomplishment of 73 percent with a full width concrete paved road length of 12 km and the New Dapitan Bridge nearing completion with finished concrete girders and deck slab.

The 24 km Alicia-Malangas Road in Zamboanga Sibugay is at 66 percent with concrete cement paved length of 15 km full width and structures of five (5) of the eight (8) bridges substantially finished while the three (3) others have completed bored piles and prepared girders.

Also in Zamboanga Sibugay, the 29.76 km Lutiman-Guicam-Olutanga Road is at 58 percent with a full width paved length of 17.26 km wherein 11.97 km are located on mainland side and 5.29 km on the island side.

During the project monitoring meeting in Ipil, Zamboanga Del Norte, Undersecretary Sadain reminded the contractors and consultants to strictly comply with the DPWH construction safety guidelines like the wearing of personal protective equipment, practice the standard health protocols in the workplace during this pandemic, and to give special attention for the immediate resolution of problems that may delay the work progress.