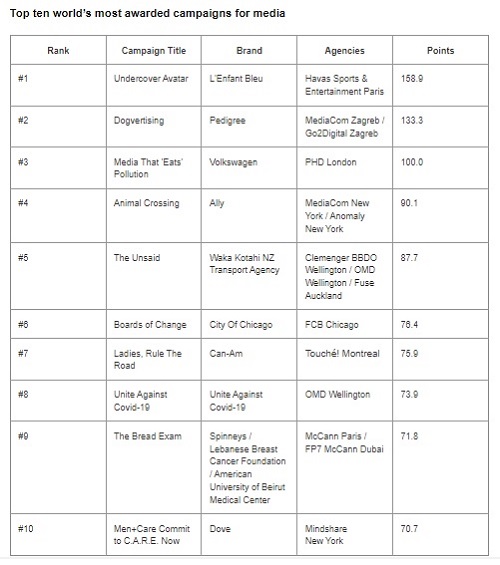 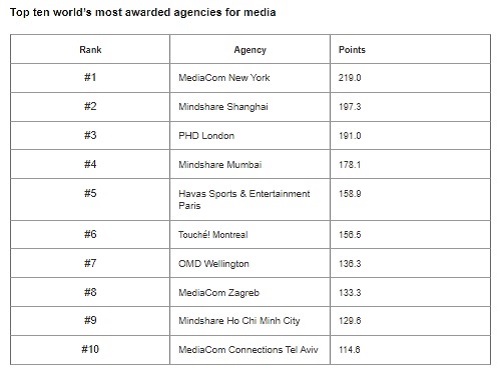 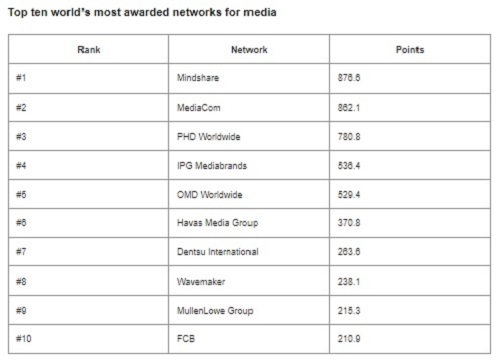 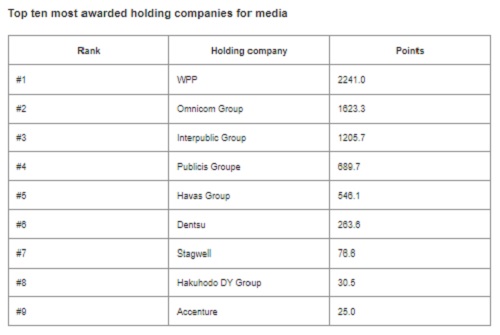 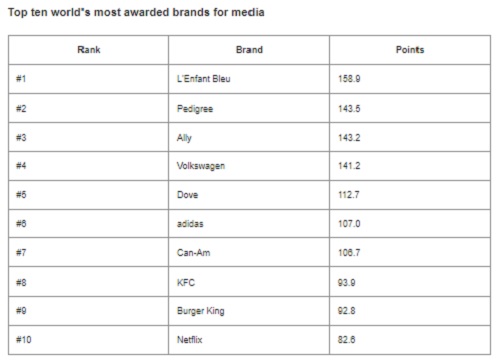 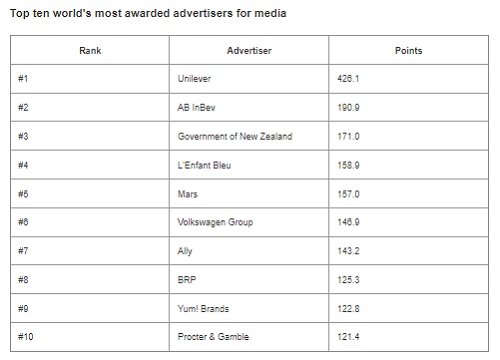 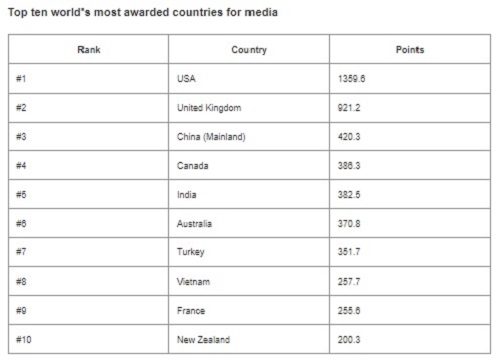 Compiled by WARC, the international marketing insights company, the Media 100 (www.warc.com/rankings/media-100) is produced by combining the results of the industry’s most important global and regional media award shows tracked throughout 2021. The awards tracked are determined by a worldwide industry survey and in consultation with the WARC Rankings Advisory Board (www.warc.com/rankings/about).

In second place is Dogvertising for Pedigree by MediaCom Zagreb and Go2Digital Zagreb. The campaign delivered personalised advertising by DOOH technology based on dog detection. In third is Media That ‘Eats’ Pollution for Volkswagen by PHD London. To launch VW’s first fully-electric vehicle, the ID.3, they painted OOH ads using a unique air purifying paint.

#1 Media Agency: MediaCom New York
With five highly placed campaigns in the top 100 for Ally, Uber, Walgreens and Duracell, MediaCom New York has stormed up the rankings to claim global pole position. Mindshare Shanghai is in second place with eight campaigns ranked. PHD London rises to third place, up from 40th, with two campaigns, including Media That ‘Eats’ Pollution ranked #3.

Sasha Savic, CEO, MediaCom US, said: “Topping the WARC Media 100 is a defining moment for MediaCom U.S., and we could not be more honored for the recognition.

Delivering transformative campaigns is all down to our amazing people working with some of the most ambitious marketers in the world. I am most proud that the #1 ranking comes from wins across our breadth of expertise, whether data creativity, content partnerships, gaming, or social impact. My sincerest thanks to every person at MediaCom in the U.S., our clients, and our partners. This one is all yours.”

#1 Media Network: Mindshare
For a second consecutive year, taking top place is Mindshare, with seven agencies in the top 50 contributing to its tally of points. Hot on its heels and closing the points gap is MediaCom in second place and PHD Worldwide is in third, up from fourth.

Adam Gerhart, Global CEO, Mindshare, said: “The WARC 100 isn’t just about a single awards show or one campaign – it’s a celebration of being the best of the best and we’re delighted to be recognised as the most creative media network in the world for the third year running! We couldn’t do it without the unwavering energy of our teams and the liberating collaboration of our partners and clients, so thank you to everyone for helping us to continue to create media experiences that have an impact and change the world.”

#1 Holding Company: WPP
No change for the top three networks for the past five years, with WPP retaining its pole position, Omnicom Group in second place and Interpublic Group in third.

#1 Brand: L’Enfant Bleu
Newcomer to the WARC Rankings, French child welfare association L’Enfant Bleu is top brand with its outstanding and impactful campaign Undercover Avatar. Pedigree is in second place following a three year absence from the top 50. Online US bank Ally enters the the top 50 brands for the first time in third position.

Pauline Grison, Communications Director, L’Enfant Bleu, said: “L’Enfant Bleu is very proud to be #1 brand and #1 campaign in the WARC Media 100 Rankings with “Undercover Avatar”! More than a communication campaign, this device allowed us to come into contact with hundreds of children in danger in less than a month. After this period, we were much more visible in the media, and had a 200% increase in calls from witnesses of child abuse. This honour is therefore really symbolic for all these children.”

#1 Advertiser: Unilever
Multinational consumer goods company Unilever retains its number one spot for the third consecutive year. Brewing giant AB InBev, moves up one place to second. The Government of New Zealand, which has steadily climbed the Media 100 Rankings over the past couple of years, is now in third place.

Conny Braams, Chief Digital and Marketing Officer, Unilever, said: “It’s excellent to see Unilever featured in the top three of both the WARC Media 100 and Creative 100 Rankings. Retaining the number one spot in media excellence for the third year in a row is testament to the world-leading expertise of our Global Media team and agency partners, who seamlessly navigate a dynamic media landscape to build brands and drive conversion at the same time.”

#1 Country: USA
No change in the top three from last year, with USA retaining its #1 ranking, followed by the UK in second place and China in third.

Summing up, David Tiltman, SVP, Content, WARC, said: “The WARC Media 100 shows the growing influence of gaming on the media landscape. More clients are showing an understanding of the nuances of gaming beyond simple product placement or ads in games. Top campaign L’Enfant Bleu created an avatar within video game Fortnite that allowed children at risk of abuse to talk in confidence without their parents’ knowledge, and Ally Bank created a virtual island within the Animal Crossing game and created its own ‘turnip exchange’ to demonstrate its ‘smarter way to bank’ credentials to Millennials.”

The WARC Media 100 has been compiled by applying a rigorous, unbiased and transparent methodology (www.warc.com/rankings/media-100/methodology).

The WARC Media 100 Ranking can be viewed in full here (www.warc.com/rankings/media-100). It includes the world’s top 100 awarded campaigns for media, top 50 media agencies, agency networks, brands, advertisers, countries and top holding companies. The campaigns, case studies, credits and subsequent insights reports are available to WARC Rankings subscribers. The WARC Creative 100 has been announced and can be viewed here (www.warc.com/rankings/creative-100). The WARC Effective 100 will be revealed on 17 March.

About WARC – The global authority on marketing effectiveness
WARC is an Ascential company. Ascential delivers specialist information, analytics and ecommerce optimisation platforms to the world’s leading consumer brands and their ecosystems. Our world-class businesses improve performance and solve problems for our customers by delivering immediately actionable information combined with visionary longer-term thinking across Digital Commerce, Product Design and Marketing. We also serve customers across Retail & Financial Services. With more than 2,000 employees across five continents, we combine local expertise with a global footprint for clients in over 120 countries. Ascential is listed on the London Stock Exchange.

For over 30 years WARC has been powering the marketing segment by providing rigorous and unbiased evidence, expertise and guidance to make marketers more effective. WARC services include 96,000+ case studies, best practice guides, research papers, special reports, advertising trend data, news & opinion articles, as well as webinars, awards, events and advisory services. WARC operates out of London, New York, Singapore and Shanghai, servicing a community of over 75,000 marketers in more than 1,200 companies in 100+ markets and collaborates with 50+ industry partners.

To compile the WARC Media 100, WARC tracks different advertising competitions around the world — all of them require entrants to show the impact of media on the campaign. Campaigns (and the brands and agencies behind them) are awarded points based on the prizes they win in those competitions.

The WARC Media 100 methodology follows the approach of the WARC Effective 100 methodology, which was developed in consultation with an independent third party: Douglas West, professor of marketing and programme director at King’s College, London.